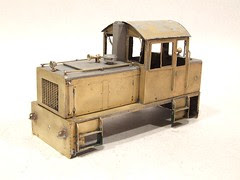 I wasn't really happy with the work of the paint stripper so decided to dig out the Badger sand blasting set to see if this could shift the stubborn stuff out of the crevices and difficult to scrape areas on the locomotive. Out came the big compressor and the gun, along with a plastic crate to act as a blasting cabinet.

On when the gloves, dust mask and off I went, blasting most of my supply of aluminium oxide onto the model.

Did it work ? Errr, not really. The brass was affected in a way that will key it and enable to paint to stick well but that paint already on the model stayed pretty much where it was. Occasionally I managed to get a bit of an effect but not often. I'd anticipated blowing the paint off with ease but was constantly frustrated. It might be that my oxide wasn't in the best condition - it isn't a new tub and I'm not sure how often it has been through the gun, perhaps the grain corners have been blown off through being battered against metal model railway engines.

With equipment out I though I'd have a crack at some soda blasting. It's popular in the classic car world as despite being as messy as sandblasting, the mess can be washed away with water and doesn't harm the environment. The action is less harmful to the, metal than the sand version. I loaded the gun with baking soda and tried it out. Result, rubbish. Perhaps the stuff wasn't sharp enough (again) and different brands, especially ones not out of their sell by date, would work better.

Whatever I use, this is a horribly messy job as I don't have acess to a proper blasting cabinet. Even working in a crate I had to keep stopping to brush blasting media off everything, out of my hair and clothes. Don't do it in your best suit is my advice.
Posted by Phil Parker at 2:45 AM