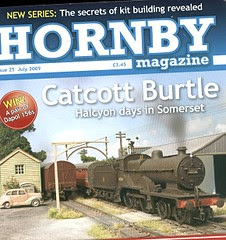 Hornby Magazine - July 2009
Originally uploaded by Phil_Parker
This month's Hornby Magazine is a good one for me - two articles in glorious technicolor.

First: The Melbridge Box Company makes it's debut in print. This starts with a two-page spread showing most of the layout. This is printed several times larger than life size and yet still looks OK. The only thing missing from the piece is a shot of the buildings in a disassembled state, but then you can get this on the layouts web site.

Second: My exciting new series on kit building kicks off. Entertainingly called "Parker's Guides" by the editor, my mission is to persuade people to take up their modelling knives and have a go at something beyond flashing the plastic in the model shop. These builds are exclusive to Hornby Magazine and you won't be seeing them on this blog. First up is a build of a couple of coal wagons, Parkside's French Door mineral and the classic Airfix 16T. Lots of step by step photos and pointers to avoid the worst problems.

Arriving in WH Smiths (other newsagents are available) yesterday I got a nasty shock. For some reason they had buried the magazine on the rack. That and the pile was down to a couple of copies, one of which was well thumbed.
Posted by Phil Parker at 8:31 AM