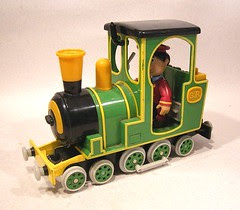 Junk I bought from Car Boot Sales and now don't know what to do with.

For those who weren't children, or owners of children, in the 1980's - or students who spent the day watching television rather than studying - the Glendale Rocket is a feature of the Postman Pat TV series. Apparently it ran between Greedale and Pencaster. The photo shows a model of the locomotive produced as a bit of merchandise to make the BBC richer. I bought it because it looked interesting, nice and only cost me £2.50

My first thought was that this could be converted to run on the garden railway. However with a gauge of 58mm this would be quite a challenge as the garden track is 45mm. In theory a rebuilt chassis could be made but that would push the wheels further under the body which might look odd. Anyway you'd have to dramatically re-work the front end and it would all be far too much hassle.

The loco does give me an idea for a layout though. An idea that if carried out properly, would be a real winner on the model railway exhibition circuit.

How about building an imaginary station which sees trains from popular children's TV series ?

For the minute I suggest we ignore the obvious Thomas the Tank and Underground Ernie stuff. No, I mean classic TV. The proper stuff. Starting with Pat we have the Glendale Rocket and apparently the Pencaster Flyer.

Then we add in Chigley so the line gets Bessie driven by Lord Belborough. Bessie was either painted in two different liveries or there is a second locomotive in the fleet. That gets us 4 engines.

Ivor the Engine takes us to 5. OK, so he only appeared in a cartoon, but I think there is enough detail to make a reasonable model along with Jones the Steam.

Surrounding scenery is easy. A combination of Glendale, Trumpton, Chigley and Camberwick green complete with the characters like Windy Miller and Pugh, Pugh, Barney McGrew, Cuthbert, Dibble and Grubb would be easy enough to do. After all, the real things weren't the most sphisticated models !

Now this sort of model is often the product of the "club clown". He'll hack the models out badly using cheap chassis that don't work very well and plastic kit buildings looking nothing much like the ones in the TV series. To make a really special (and popular) layout, things need to be done properly. That's going to mean a lot of scratch building. Not easy as you'll have to draw the plans up yourself, very few models of the TV models exist and so some skill would be needed to get the proportions right.

Think of it though. What a model. Never mind your P4 perfection, this is what the public want.

Update: Yes, I know, the title of the post should be "Greendale" not Glendale" Rocket. It's fixed now. Sorry to all the Pat fans.

Isn't that the "Greendale Rocket?"

My 2-year old is a huge fan of Postman Pat (as well as Thomas and loads of other telly) so that would be a hit with him!

I don't remember there being a train in Postman Pat, but it sounds like a brilliant idea.