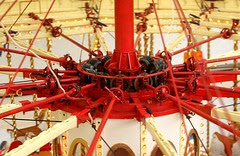 Waltzer top
Originally uploaded by Phil_Parker
I took my Dad for a Fathers Day treat to Hillers near Evesham. It's got nice coffee shop with excellent chocolate cake, a fine farm shop with delicious organic produce and a miniature railway. Oh and they were holding a small model engineering show. Well, he doesn't cook but loves the sound and smell of a steam engine...

Anyway, we wandered around the displays and were impressed at the workmanship to be seen even in such a tiny are as this. The photo shows the top of a model gallopers which is under construction. I suppose I should have been looking at the pretty horses (I did wonder how you carve so many identical steeds) or the exquisite organ in the centre. Not me, I looked at the gears and mechanism that made the horses go up and down. I've always wondered how these things worked and looking into the works I could see easily. The bevel gears run on a rack and as the carousel rotates it drives these which rotate a rod which the horses are attached to and this moves them up and down. Fascinating.

Well I found it fascination. Stop looking at me like that.

Anyway, we had a ride on the miniature train (fare 70p) which runs in an overlapped figure of 8 for 1/3 of a mile. 7 1/4 and 5 inch gauges can be accommodated. Along the way there are loads of gnomes, waterfalls and wild (plastic) beasts to look at. This is a clever marketing move as kids want to take several rides so they get to see everything. It certainly worked for the children behind us. This might be a particularly British thing, but there is something both daft and fun riding a tiny train behind a little steam engine.

There were static boats and planes to look at. We had a nice chat with the guys from Evesham MBC who had some fine models. The longest talk though was with a pair of miniature traction engine owners. I now have a better idea how to drive one of these and also the work involved in building one. From being the other side of the barrier I know how pleasant it is to meet people who have some idea of the work but ask intelligent questions - you get to show off a little someone who sees lots of well made components rather than just a "pretty" engine. After all those years in the workshop (3-4) getting to bask in the glory of your creation must be a relief. What better way to spend a sunny Sunday ? 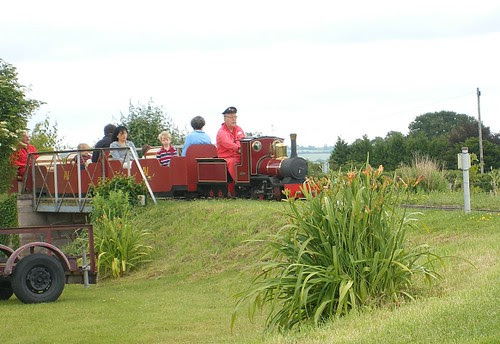