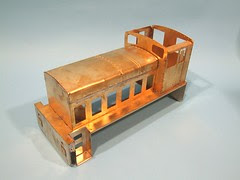 This is a large, flat sheet which has to be bent and riveted then soldered over some formers with nothing in the way of positive location assistance.

First up I riveted the sheet. Then it was annealed as best I could using a cooker flame. I'd hoped that this would make the metal malleable but if it did, I couldn't tell the difference. The top bend is easy enough, it's pretty gentle and can be formed around any round object. Pondering the sharp corner though I chickened out and decided to use the formers to make sure everything is in the right place. That sounds sensible but it's risky - pull metal too hard over thin formers and you get sags between ridges.

The top was attached centrally and then the bending started. Most of the work was done with fingers. Eventually though, more brutality was required and I clamped the whole thing upside down in a vice with wood to protect the rivets, and lots of heat and solder pinned the ends of the top to the former sides. Not pretty, not fun (the wood kept catching fire) but it worked.
Posted by Phil Parker at 7:50 AM