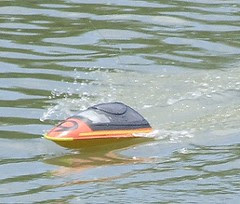 Down came the rain.

I arrived at the boat club around 9am and was met buy a couple of the other committee members looking bedraggled. We repaired to the clubhouse for a coffee and decision on the rest of the day. The general opinion was that there wasn't much point in hanging on as long as planned. However, expecting a few more people to turn up we erected a new (well, £10 car boot sale bargain) gazebo to keep the rain off those not able to cram into the clubhouse itself.

Gradually more members arrived. Most were a touch wet but still seemed happy. I tested my Slingshot out of sheer bloody mindedness and was followed onto the water by a member of the Footie society . His swing rigged vessel seemed to be able to extract every ounce of propulsion from the meagre wind on the lake. A second boat joined in and from the comfort of our tent we had some sailing !

By 11am Alistair Roach arrived to judge the cork boat competition. He even brought the good weather with him and so after judging (well done for winning the beautiful boat competition Rob) the boats were launched and pottered around the water. When we had a breath of wind they sailed off, most of the time towards the bank admittedly but sail they did.

After this the weather was a bit mixed with odd showers. Enough sunshine allowed some general sailing and a couple of slingshot races. My boat seems to be OK now, clocking up over 16 laps in each race. Quite a lot of water is finding its way inside though, The prop tube can be the only possible source so I'll need to look at greasing the shaft to stop this happening.

By early afternoon lost of us were sailed out. When I left a couple of people enjoyed the sunshine and the chance to get on the water without anyone else around. It just goes to show - even when the weather doesn't want to play ball, all you need is the right group of slightly mad people to have a good time. 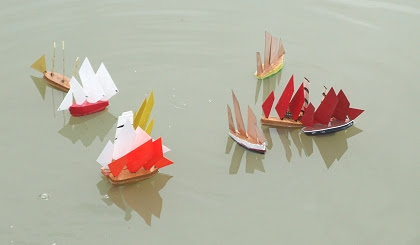