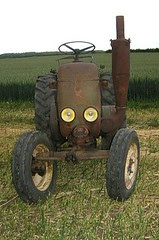 Our railway club is based on a farm. We are surrounded by fields and bucolic Warwickshire scenery. It's handy for the model boat club and on a nice day a lovely place to be.

The farmer, our landlord, collects tractors. Not any old tractors (all farmers do that, mostly rusty, broken ones) but foreign single cylinder ones. He's not alone either, it seems there are plenty of other people out there who collect and restore these machines. And they like to show them off so he organised a weekend get together.

On the Saturday evening there was to be a hog roast and after a little negotiation, the railway club was to be opened up to provide some toilet facilities, it being felt that some of those who wanted to eat might be considered to delicate for the portaloos already laid on. If we had enough people some of the layouts would be operating too as an added attraction. As it was most were run and when people weren't consuming dead pig we had a reasonable sized audience.

Now, I quite like putting on a show for the public as opposed to "proper" modellers. If you've read my reports on shows before (and if not, feel free to catch up on old entries, it should distract you from work for a while) you'll know that I find the early morning session at any model railway exhibition usually presents a crowd that stand around looking grumpy in silence. Later in the day the families start to arrive and they aren't afraid to ask questions and chat for fear of looking stupid.

So, a room full of normal people was chatty and generally very appreciative of the models on display. "Modellers" may see the buildings on one layout as simple card kits - humans look at the effect and are gobsmacked that over 100 houses make up the scene that looks a bit Coronation Street. They also don't get picky about the formation of trains but do get excited about sheep and pigs on hillsides. I suppose the tractor hobby has a higher farmer:townie ratio so they can probably tell us what breed the pig is, we just think it's Priesler.

Of course there has to be one.

Since I'm not attached to a layout, I did a bit of general stewarding. My first job was to use some barriers to prevent access to one corner of the premises which had a couple of layouts not being operated and also workbenches with tools on. I set the barriers so it was easily possible to see the layout and yet protected it from wandering hands. This worked a treat - lots of people enjoyed the model (especially the steam road roller on the bridge) and appreciated the high level of craftsmanship on display. In fact they were less trouble than the average enthusiast at a show.

All except one mother and young daughter, who found a circuitous route around the various obstacles and by the time I got to he were in front of the station forecourt and pointing at the horse drawn vehicles in the scene. Before pointing became touching I politely invited them to return to the correct side of the barrier. Mum huffed, "I only wanted to get her [the daughter] closer to the horses."

And to be fair she had. A whopping 6 inches. They were easily seen from the barrier side but that wasn't good enough. So she taught her daughter a lesson - if you can physically overcome an obstacle then it's OK to ignore it. Find a gap in that fence and it's OK to go through even if the implication of the fence is that you should stay back.

Having returned to the public side she then flounced off to the foyer with child and spent the next few minutes giving me evil looks before dragging the rest of her party (Dad ?) out. Obviously it was me that was in the wrong !

Now you might argue that if we don't want to take the risk then fragile things should not be out on display, but why should this be the case ? The people who build layouts are justifiably proud of thier work and keen to let others see the results of thier labours. If we want to persuade anyone that railway modelling isn't just funny men playing with trains, showing off high quality models seems a good method. Obviously there is a risk and we accept that. I've seen accidents happen and the person who did the damage is usually mortified - it ruins thier day more than the person who ends up with the repair.

Ifyou feel the need to see more farm equipment, you'll be pleased to know there are more photos here. Go on, fill your gumboots !

Or if you just want to watch the trains go by: