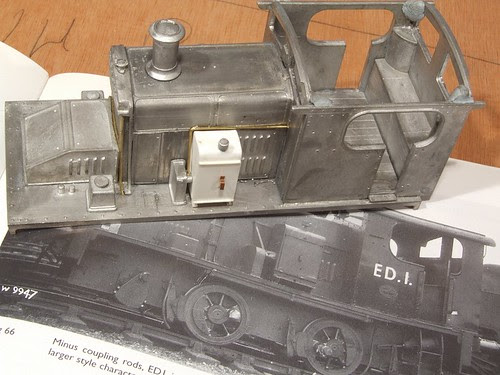 Having decided that the auxiliary engine (used to start the main engine I presume) supplied in the Fowler kit was too small for the LMS version of the shunter, I had to build a replacement.

Needless to say I don't have a plan to hand so I'm working from photos so the first job was to work out dimensions. Height of the box is easy enough as it can be judged from the panel lines on the bonnet. Width was harder. I made a square that ought to be right but on the model it looked too long. It might have been right but it looked wrong.It's half as big again as the original whitemetal part though.

My choice involved going with something that I suspect is a few mm short but looks better in 3D. To be honest, I'm lacking so much detail in this area that anything is only going to be an approximation. I've also cheated even more as when first built the cover features small louvres. It lost those later in life and I'm assuming that when I modelled the engine, they had gone.

Anyway, the box has a 2mm thick plastic core covered with 0.5mm sheet fixed with that nice citrus smelling solvent that doesn't buckle the surface. The lump on the side is whitemetal and comes with the kit. It looks a bit close to the main engine box to me but I can't tell what goes between the two so I'll live with it. Parts are included with the kit but they all look wrong , and don't match the diagram in the instructions, too.

This all sounds very poor but I bet once the engine is finished and running on the layout, no-one notices. Truth is, they probably wouldn't have noticed if I'd just used the old bits.
Posted by Phil Parker at 5:30 AM

I don't suppose I would notice that you had changed things either.
I usually leave things like that to the rivet counters and Pedants.
Although how they can count things like rivets on a 4mm scale model running along a layout three feet from there eyes amazes me!

Now that Ixion have launched their intention to produce the Fowler 0-4-0DM GWR No1 as a RTR model, I bet that you’re glad you opted for the LMS version.

I was interested to see you description of working out sizes from the photographs; been there, too. Have you seen my LMS No. 2 at: www.davidlosmith.co.uk/LMS_Fowler.htm

I was not impressed when I spotted the Ixion announcement on Saturday...

Mind you, if i was part way through lining out GWR No.1 then I'd be even less happy!

I was halfway through building Husdwell Clarke Easingwold No.2 when Ixion came out with theirs, so I do know what you mean. However, Easingwold is different in a number of ways (eg twelve spokes rather than the ten of Ixion's model; marine bigends, etc.) so I shall press on with it and it will be different.

I meant to say that I recently added the two official Fowler works photos to the page about my model, which might help you with estimating measurements.