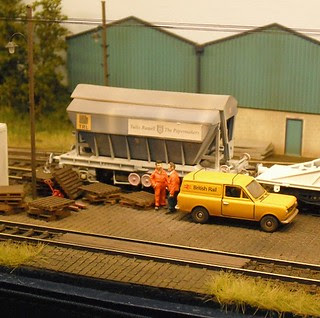 Like Leamington, Stafford Model Railway exhibition is one where the organisers look at the weeks weather forecasts with great concern. This year they escaped the snow but that's not always the case - the event is held on an agricultural showground and I've been there with snow in the ground.

To be honest I'm not that fussed. There is an excellent vintage (read: unheated) bus service from the station and if this is running then the weather is OK. The trip is free but the people running the bus rattle a bucket for donations. Listening to some of your fellow passengers boasting how little they gave (I put 50p in and took a pound change. Hilarious) was a bit annoying. The same cheapskates were probably happy to stuff a DCC chip into a brand new toy train later on...

It also attract bus enthusiasts. The pair behind me were discussing the specifications of our transport, only interrupting the flow when a new Scania (or something) modern bus hoved into view. Still, I know a lot more about the Kidderminster bus politics now, so who am I to complain. They were happy enough when it was spotted there were two vintage vehicles on the service and plans were made to ensure they got a ride on both.

Anyway, inside the hall, I dropped the WD Barclay off and it was soon looking lovely on the stand. Then I had a mooch around. The trade is good but I wasn't after much. The second hand stall was busy and it was fun listening to one punter explaining to the staff behind it that the Wrightlines kits were priced at more then new ones, which he reckoned are still available. This might be true, but the person who entered them onto the stand will have set the price and there's not much those volunteers working it can do about this. If they don't sell, it's not their fault. 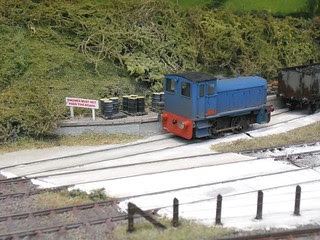 Layouts were largely ones I had seen before. This was lucky as the crowds were good and I couldn't get near very much before lunch (sausage roll and a cake to sickly for even me).

Once things settled, I found a few scenes that I really like. A couple of blue diesel layouts caught my eye, one in 4 and one in 7mm. Both seemed to have caught the 1970's atmosphere just right, or as right as someone born then who augments his memories with episodes of "The Professionals" can tell.

Sadly the 7mm was full of steam engine among the BR blue. I know I love to run what I like but at least this is usually left until late in the day, not prime time. Worse, the engine had a smoke generator, something that was getting couple of gricers very excited. Presumably they had never actually looked at the chuffy bits of a choo-choo or they would have realised that the smoke was pouring out of the chimney like oil heated by and element and not in any way like a real steam engine. 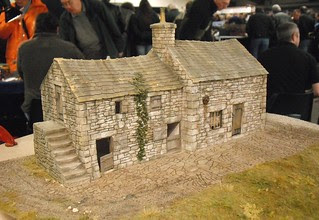 In the middle of the 2nd hall were some demonstrations. Some of the best I've seen to be honest. For sheer oddness, the 1/32nd German wartime trains take a lot of beating. I've always wondered what those kits look like made up and now I know. And I want to do the rail-mounted gun even more. Mind you, I've had a 1:97 kit stashed away for over a decade...

David Wright of Dovedale models was showing some lovely, atmospheric buildings including a cracking stone structure that is one of the best I've ever seen. Behind him, Ian Thompson showed tram construction in plasticard to a superb standard. What's interesting is that this work was attracting loads of attention despite being the exact opposite of what the majority of people attending will ever attempt. Perhaps if visitors could take away an understanding that the construction is just as much fun as the owning, the hobby would be in a better shape.

My Stafford exhibition photos on Flickr
Posted by Phil Parker at 5:30 AM

Totally agree with the sentiments of your last paragraph. My goodness, that David Wright produces some beautiful models...thanks for the link to his site.