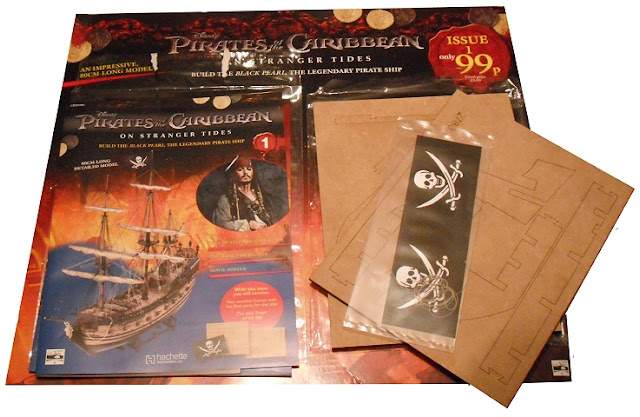 Partwork season is upon us and knowing my interest in the subject, Matt Dawson alerted me to the new Hachette "Pirates of the Caribbean" series. A quick squiz in Leamington WH Smiths left me wanting but the next day, Stratford-upon-Avon's store sorted me out.

As is usual with these things, issue one cost 99p. Future installments run to £5.99 and since the model is complete in 100 issues, will cost you £594

The kit is by the well known firm Amati, so it isn't going to be rubbish. The details shown in the photos certainly look impressive.

With the first mag, you get some laser-cut MDF parts that make up into a frankly unrecognisable bit of the ship. There's a self-adhesive pirate flag too, probably the bit I'll keep. The print contains step-by-step instructions, stuff about the Black Pearl and Jack Sparrow. It's profusely illustrated with photos from the films so Disney are presumably taking a chunk of the money in licencing fees.

Recognising that kids will like the look of this, there's a few mentions that an adult should be involved with the building process. Inside one of the covers there is small print pointing out this is not a toy and isn't suitable for the under 14's, nor should you set it on fire.

Treated as a "bonding exercise", I can see this project working. A keen child working with a parent of grand parent could get  a lot out of putting this model together. If I have a worry, it's that with it taking 2 years to acquire all the parts, I bet that a lot of kids lose interest before they reach the half way point. Not being able to sail the finished model won't help either.

If Granddad has space to store the work in progress and uses it as a treat when the young model maker comes to visit, then it could work. By the end of the build, hopefully the youngster will be hooked and want to do something else. Probably something else that comes in a single box. albeit with rather less fulsome instructions.
Posted by Phil Parker at 5:30 AM

Your blog is amazing, and I love your updates of previous projects you have done. I myself purchased this, Keeping in mind I never built or done anything like this before, but the little details that are contained inside the ship is what enticed me to buy it in the 1st place as well as being a huge POTC fan :p...maybe with your help I can work on this project lol.
But the fact I will have to wait '2 YEARS' for this to all come out is going to be killing me inside and I nearly chocked when I realised that the whole issue will cost me around £500 or so pounds...*big sigh* ...hopefully the end result will be satisfying...

Glad you are enjoying the blog.

The Black Pearl looks like it will be an impressive model when complete. Don't worry about the time it takes - you'll sometimes find it a struggle to keep up with the issues. Normal life sometimes gets in the way. Keep going though and you'll have a model to be proud of. Good luck.

Hi phill I'm currently on issue 5 and I'm unsure as to the wooden parts 18 whether they sit at a right angle to wooden part 1 and 17 or should they be at a slight angle.

Sorry Darren - I'm not building the model I just reviewed the first issue so I can't help I'm afraid.

Good luck with your model though.

Hi all
Darren parts 18 should sit flush against 1 and 17 hope that helps.

hi, Phil, I have run into a bit of a problem I have every issue but I am only up issue 8 and I have messed up is there anyway I can get the first 8 issues again

Best bet would be to go back to the publisher and buy a back copy. Either that or look at eBay and see if anyone is selling them.

Is there anywhere I can still purchase the set or are there any alternatives?