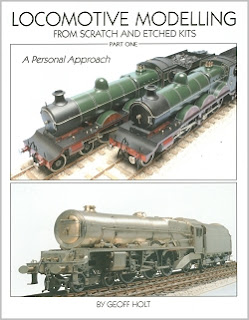 Geoff Holt is the sort of modeller I aspire to become and know that I never will. He is the man who scatchbuilt many engines for Pete Watermans collection in both O  and 1 gauges. Each one is a masterpiece of the modelmakers art.

His book, the first half of a set, is really aimed at people who aspire to be great workmen but realistically never will. We like to perv over techniques but the truth is that we won't even care very much about the retaining nuts on a locomotives valve gear other than to hope they won't fall off while its running.

It has to be this way. If the market is really for people who are going to do this sort of thing then the book will sell 10 copies and it's far too good for that.

While etched kits are mentioned, this is a book for scratchbuilders. That's how Geoff works and sensibly who he writes for. That's not to say kitbuilders won't learn a lot - quite the opposite as there is much shared ground - it's just that the approach is different. When you are working with raw materials to produce a museum quality model, you head off to the NRM for the drawings. Kitbuilders will probably rely on the designer (it's what he's there for) or dig something out of an old Railway Modeller magazine.

At the back of the book, two engines are started - one scratch built and one from a kit. The idea is that the different techniques are shown although I think this is marginal at this stage, especially when it comes to inside working valve gear. The next book will probably show more variety.

This volume covers materials (choice and usage), tools, drawing and frames. The photos are excellent and the words very readable.There is a lot of information contained in the softback covers on real engines and how they are put together - the brake gear details are better than I've seen before for example.

It will live on my shelf and occasionally come down for reference and inspiration.  I'll buy volume 2 too.

Locomotive Modelling from Scratch and Etched kits from Amazon