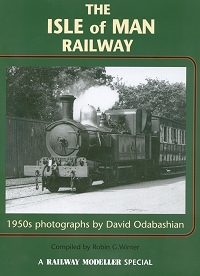 This book is unashamedly for Isle of Man railway anoraks. Which is why I bought it as soon as I saw a copy.

The book contains the photographs of David Odabashian who took them on his holidays to Mona's isle. They aren't simple holiday snaps though. What we have is an amazingly comprehensive set of images covering the rolling stock on the steam railway. There are some shots of stations and a few but he seems fascinated by the rolling stock. So  much so, that there are compete sets showing every single wagon in its own photo. Likewise, we get the vans and coaches and of course, locos.

Line side features aren't forgotten, I've never seen so many signals, in fact I didn't realise there were that many on the island.

There is only one omission I can see and that is that there's nothing for the Foxdale branch, but I think I can't complain about that (well, I could long an boringly but that is for Internet forums) since there simply isn't a resource around as comprehensive as this for rolling stock.

Photo reproduction is as good as the black and white originals will allow. Fortunately these are pretty good and show details that are far from likely to be modelled by normal people.

Top marks to Peco Publications to putting this book out too. OK, so at a tenner for 66 pages, some will suck the breath through their teeth but it's never going to sell millions. For anyone who aspires to model the IOM steam railway, or even has a serious interest, it's a must-buy.

The Isle of Man Railway at Peco
Posted by Phil Parker at 5:30 AM