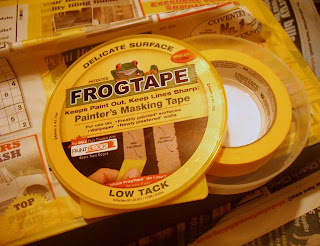 While yapping about painting on Tuesday, a guy in the audience asked about something called "Frogtape" which he'd seen at the local DIY shed. He didn't know much about it other than the makers claimed it was especially good at delineating paint lines (he didn't say delineating, that's a posh writers word I put in).

I assumed that this was marketing bollocks hyperbole and could safely be ignored. Doubtless the phrase "As seen on TV" would also be there and we all know that is Marketing for "This is rubbish but the sort of people who watch shopping channels might be dumb enough to buy it."

Anyway, at the weekend I was wandering around a DIY shed and spotted the fabled tape on sale. So I took a look.

Supplied in an over-large plastic box, the tape can be purchased in two flavours, normal and low tack. It employs something called "PaintBlock" technology to stop seepage between colours. Apparently it is the ONLY tape that features this, presumably because the Frogtape makers have seen fit to patent it and will take anyone to court if they try and nick it. According to the website, "Paintblock" is a super-absorbent polymer which reacts with emulsion paint and instantly gels to form a micro-barrier that seals the edges of the tape, preventing paint bleed - so no use to me then.

More importantly, the stuff costs 7 quid for a roll which contains 41.1 metres of tape. Basically, a pound buys you over 5 metres. I think this is cheaper than Tamiya tape, although I can't find any indication how much they supply on a roll. Anyway, I had a boat hull to mask so it seemed worth a go. The job required something better than cheap automotive tape but I wasn't going to splurge on the real model stuff if I could help it. I opted for the Low Tack version as I was masking over paint.

The tape feels plasticy, certainly much smoother and better quality than the normal stuff. It stuck well enough and could be smoothed down just like the best tapes. It feels thicker than Tamiya etc although I didn't bother measuring anything as I wasn't going to get my calipers all sticky. This might be a problem for model work as it's going to be less flexible.

As far as keeping paint under control, for the job I was doing it worked very well. I masked along the chine line (an angled section of hull for non-boaties) and this involved spraying upward against the sticky side - surely where the masking should fail. As it was, the lines were clean and neat. Peeling the tape off was smooth and easy with no paint lifting from underneath.

The stuff certainly feels quality. I'll use up the roll on other projects, especially those where flexibility isn't important. I also want to try cutting the 24mm width down a bit for small jobs.

I also used this stuff when painting my living room. It is super good. Almost two good, as my badly laid tape left a slightly wonky line! Definitely a bad workmen than the tools though, it is an excellent product.