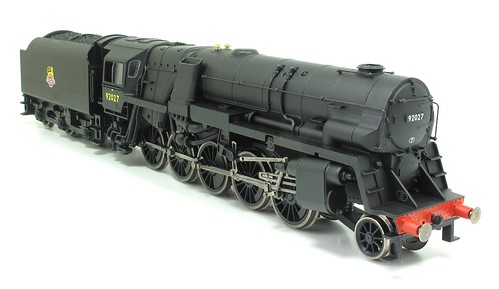 I remember when I first became aware of the Crosti 9F. It was in an issue of Scale Trains back in the 1980s. There was a double page spread of photos showing the supremely ugly sister of Evening Star followed by a conversion to the Hornby model using a Crownline kit.

I was smitten. Big locos don't normally do anything for me unless they are ugly. And the Crosti is really ugly, partly because of the design with all the bit hanging on the side but mostly thanks to the complete lack of cleaning any of them seemed to received after construction.

I never found the Crownline conversion kit on sale at a price I could afford. When it was readily available, I was too broke and by the time I had money, the firm had vanished.

To be fair, my experience of Crownline kits wasn't great. The 4F detailing pack seemed to contain many whitemetal lumps that bore only a passing resemblance to the thing they were supposed to represent. Even as a youth, I knew that the blind side chimney on the Crosti was going to be interesting to open out.

Anyway, years later, Golden Arrow produced a resin kit for the beast, but I couldn't justify buying one as I didn't really have anywhere to run it. Then Hornby announced they would be producing the loco in their Railroad range.

The pre-production model appeared after a few years and looked very nice. I had a feeling that I'd be buying one when it came out and that's what happened this week. My local model shop relieved me of £110 (RRP is £119) after I made sure it worked on the counter top layout and I returned home feeling a little guilty for my extravagance. After all, I still don't have a layout for the thing to run on.

First impressions are good. Despite being in the Railroad range, home to older or less detailed mouldings, I'm impressed with this brand new model. There's nothing of the old 9F in here, this has been designed from the ground up. The model isn't perfect but it's a darn sight better than anything I'd have built years ago. 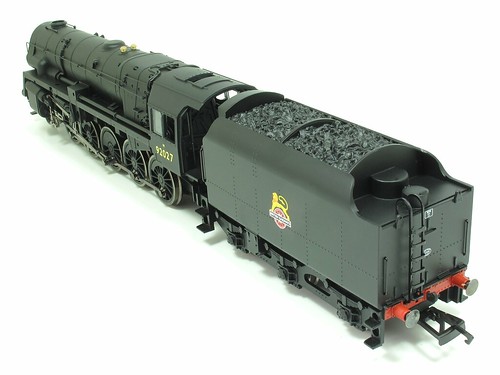 To my eye, they have caught the look of the loco. I can't claim to be an expert but the side chimney looks pretty right. The front end is good. Maybe the pipework on the firebox and under the cab is a bit basic but the latter can be improved by rounding off the pipes with a file.
I'd expect to see a detailing kit appear for these soon with new pipe and possibly an etched smoke deflector as fitted part way through the locos lives.

Cab detail is basic but adequate for the model as you can't really see inside. Windows are glazed nicely though.
I'm told that some of the locos only had a single handrail up by the conventional chimney which was used for lighting up and the model has two. This is easily rectified. A nice touch there is that there is a representation of the hatch that closed it off while running.
At the back the tender is permanently fitted with a non-adjustable bar. Well, unless you can undo a cross headed screw anyway. It's light and empty so probably the location of choice for DCC chips and a honking great speaker. In the top is the most plastic looking coal ever seen, they might as well have sprayed it at the same time as the body.
For me the biggest fault is at the font, the pony truck has issues. 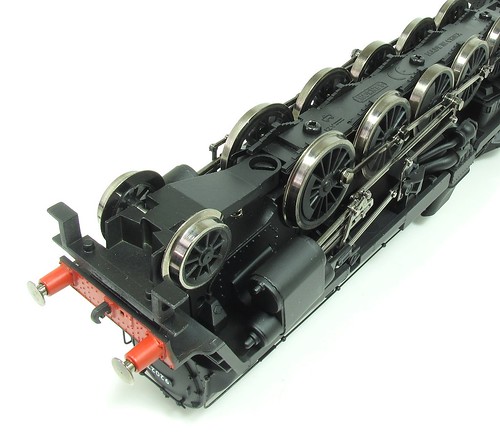 The 1980s called - they would like their "Silver Seal" wheels back please!
Quite why the flanges are twice the size of those on the drivers is a mystery. A coupling is supplied to slot into that triangular fitting so trains can be hauled in reverse and I wonder if this explains the wheels. Perhaps it's felt that when pulling a long train from this end, the wheels need all the help they can get to stay on the rails. The pony is sprung though so I can't see a problem. Changing to something prettier shouldn't be hard.
While I'm fiddling with the pony, the steps can come off and be fitted under the buffer beam. This compromise it to get the model around 2nd radius curves but it looks crude. Again, a detail kit will probably include some etched steps which will look a lot better.
Wider gaugers might chose to retain the waggly bits as they are in the right place - a fat boss arrangement on the middle (correctly unflanged) drivers sorts things out for us narrow gaugers.
Running is good. I tested the model on the L&WMRS Duxbury layout and I leave you with a little film of it trundling around.

Wow, those wheels would have come in handy for cutting my pizza last night :)

I can't really comment on it's resemblance to the prototype as I'm really not all that familiar with steamies, my only interest pre-diesel had these strange looking sheds pulling trains for roughly 5 and a half miles. It certainly isn't a pretty looking loco though, I'm hoping that like the American Big Boy, big and ugly = powerful

Despite the use of a phone camera and overly dramatic backing music you have failed to make the ideal video for this product by running the loco right line with a suitable rake of wagons (with a brake) behind it. I couldn't see any upside-down crossing gates either.

Must do worse. See me in my office.

I bought Hornby Railroad Olton Hall in March this year and have been very pleased with it. The loco supports all the positive reviews.
Looks like Hornby have triumphed again with the Crosti in the "good value for money" stakes.