Over on RMweb, in the discussion about Ruston Quays, someone mentioned the Formcraft building system launched in the 1980s.
Long out of production, the concept is reminiscent of Bayko. Blocks were joined together, not with Lego style studs, but with vertical rods. Formcraft rods were made of ABS unlike the Bayko steel ones. Most importantly, the Formcraft blocks were scale 4mm bricks, or at least small groups of bricks. 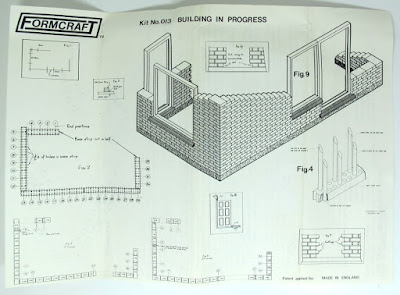 Assembly was incredibly time-consuming and if you weren't very careful, resulted in wobbly walls. Flexible rods might have tied the walls together but they didn't always help with perfect brickwork. for that, the modeller had to take the same care as a real brick layer.
The system included windows, doors and kerbstones. These were available separately and still turn up from time to time. I had a feeling they ended up in the C&L range but can't see them on the website. ﻿ 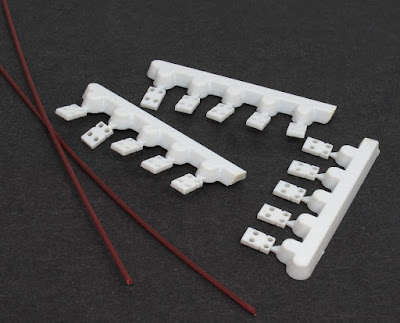 Not long after production commenced, the makers realised that spending a lifetime putting together a single structure wasn't appealing and introduced some larger modules for plain brickwork. These stopped people going mad at the cost of making the system less flexible.

Phil, I believe that this range was listed in the 1995 C & L catalogue, but had disappeared from the catalogue a couple of years later. (I don't have them with me at the moment, but can dig them out if you want to know...) I was never tempted to try it out -- although it sounds perfect for recreating the look of a wall that is about to collapse!

I have just found, in my box of bits, some Formcraft 4mm paving slabs (J33). I'm using them for platform edging. They cost 45p (a long time ago).