Is this how reviews should be? 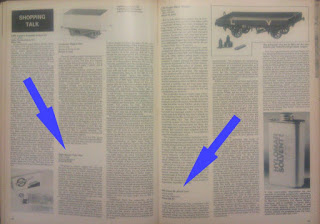 In discussions about model railway magazines, one title that is often held as an exemplar is "Model Railways", at least in the days before it was sold to an evil publisher who dragged it downmarket.

Curious to see what was so great about it, I've been flicking through old copies at my model railway club.

I'll admit I've been enjoying it. Some of the content is very much like the early MRJs and includes people like Iain Rice bashing metal and producing some nice scratch built locos. When I say nice, I mean of a quality I think I could achieve but not so perfect they are off-putting.

In other words, stuff that I like but would be castigated on forums by people who never lift a modelling tool in anger.

There's interesting prototype articles and rather more drawings than you see today - people willing to spend hours drawing up a prototype for no money presumably being thicker on the ground, or perhaps there were just more draughtsmen around then?

My best spot was in the 1983 review section, coverage of the new Hornby HST set and the same firms Class 25 diesel. To help you see them on the poor quality mobile phone photo above, I've added some blue arrows.

As you can see, despite these being major RTR releases, the only pictures on the page are wagon kits from Cambrian, Ratio and Maj models. That and a tin of thinners.

Can you imagine the howls if anyone tried this nowadays?

Don't folk howl no matter what the contents of a review?

Anyway, Model Railways was a very good magazine in its day, and as you say it did go downhill very quickly after a change of publisher. I bought it in my youth, not only did it feature some marvelous modelling (and the occasional bit of also-ran) it showed that model railway articles could be more than just 'I laid the track in the usual manner'. Rice's writings were always a joy (and still are, I've just read his latest track dsign book) and helped expand my teenage vocabulary (halcyon! There's a word than I'd never come across before).

On a vaguely related note I've recently came home with a couple of copies of Railroad Model Craftsman from the Sixties (from the Poppy Line's second hand bookshop), which I'm sure you'd find interesting Phil. Lots of actual modelling (these were that days before you could buy everything RTR) and a fair amount of humour.