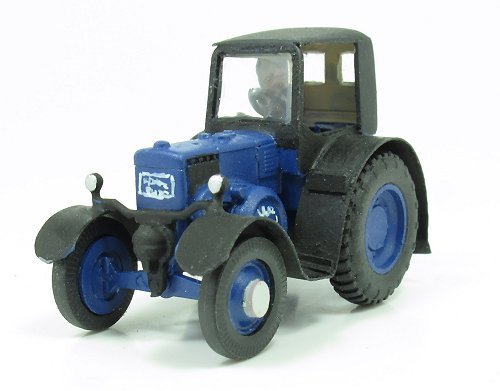 Blue paint found, the Lanz Express Bulldog tractor is ready for the farm layout. Some Humbrol Oxford blue paint is a pretty good match for the colour of the prototype. Matt black mudguards contrast with a Railmatch weathered black hood - in real like the tractor is shinny but I don't do gloss paint so the different blacks highlight the metal vs material differences.

Lettering, horribly crude in the photo but will be fine in the context of a larger model, is white ink drawn on with  a mapping pen. I picked the technique up from Geoff Kent's book and it works fine, were I a better calligrapher, the rests would be better still. The kit does come with a rub-down transfer sheet which has the Bulldog plate on it but it's the wrong colour and very thick. 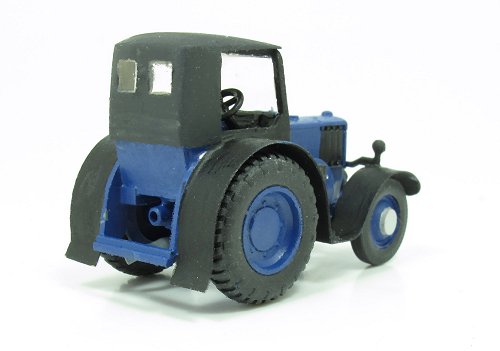 In the novel, I've fitted a front lifting device. Not sure if this would have appeared on the prototype, at least one with mudguards, but we'll worry about that when Hollywood comes a'calling to make the film. Something for the special effects guys to worry about.

How's it going with getting the book published, I'm looking forward to reading it :)

Well, we have one publisher interested and another looking at at. Whatever happens, we'll have it out by Christmas, even if we have to self-publish on Amazon.

Don't worry, I will announce it here!

If you happen to look at the Guardian Saturday Review for 14 November (or check out the website) there's a picture of John Lennon sitting on the front of a Lanz Eilbulldog in his Hamburg days.Chris Thomas