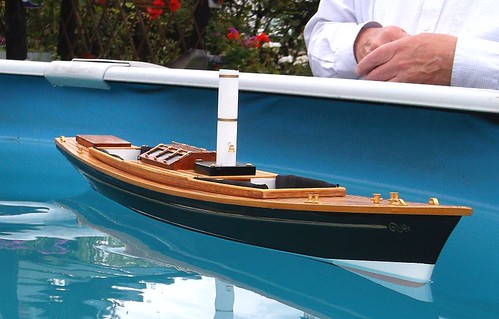 My Dad is at the stage of launching his model launch. I need to sort out the rudder linkage before sailing but first, we needed to put some weight in the hull. 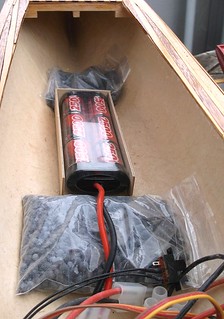 The model was launched on the garden pool and the first thing we spotted was that it was filling with water. This is a bad thing.

The water appeared to be coming in around the prop shaft so tilting the boat on its end and pouring epoxy glue around this solved the problem.

On the second voyage, the hull stayed dry inside.

We gradually added small plastic bags of large lead shot rescued from my Mum's old diving equipment. To bring the model down to a sensible level, defined as when the prop was fully immersed took 1400g.

A little tidying up by condensing the multiple bags into a couple of larger ones later and it's looking good in there. The plan is to sail the model on Thursday so I better crack on with that linkage!
Posted by Phil Parker at 5:30 AM