No intellegent man travels without a tape measure 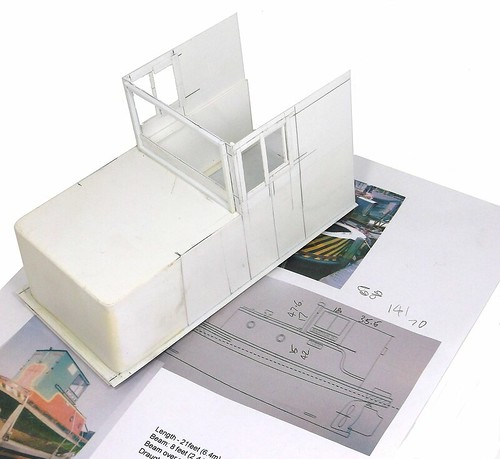 Or at least he shouldn't if he's visiting a prototype he plans to model!

Working on the Bantam superstructure, I've cursed myself for not taking a few measurements to act as a guide. The plan I have is basic and I'm not convinced, completely accurate.

While this won't be a perfect model, I'd like it to look right and so spent quite a while trying to work out how large the windows should be. The plan makes them square but the photos oblong. Worse, they appear different from different angles.

Once I'd nailed it though, the job was addictive. Sat working with a Bond film (Casino Royale, the good one) on the telly, I knocked off at midnight because I thought I ought to get some sleep. Time flies when doing this sort of job and it's satisfying to look at the model and see progress.
Posted by Phil Parker at 5:30 AM

That superstructure looks like a narrow gauge diesel - go on, put some wheels on it, it'll be more fun!

Good point. No wheels though, water will be much more fun and so much easier to arrange than all that track and ballast!