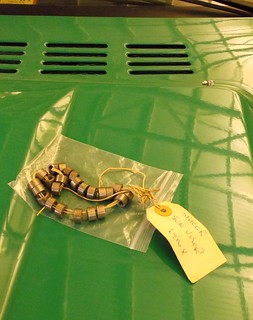 Regular readers will know I've been sorting out the late John Webb's bits and pieces. In amongst all the tools and kits, we found a collection of steel rings threaded on a bit of string.

The British Leyland paper label claimed that they are spacers for the sun visors on a Lynx.

Now this makes them rare. After all, the Lynx was a prototype fastback version of the popular TR7. Scheduled for launch in 1978, the project died when the Speke factory was shut down. John worked in the right department to have been involved with this and I assume he picked up the parts as model railway wagon weights when they were being chucked out.

I've always liked the TR7. As a kid I wanted a Beetle and then a TR7. A bit of me still does but fortunately a more sensible bit tells me that I've too many cars already and another old banger probably isn't a wise investment. I'd still like a plastic kit though, Airfix of Monagram, I'm not fussy.

Anyway, because of my interest, I knew of the Lynx in Gaydon museum so when I found the spacers, I got in touch to see if they were after some spare parts. After a chat with curator Stephen Lang, I hopped in the car and dropped them off.

The photo shows the spacers carefully placed on the Lynx bonnet. We couldn't immediately see where they should go but then the car is in pretty good shape. At least if the sun visors fall off, they now have some spare bits.

After this, I signed some paperwork to pass ownership over to the museum. I suspect that this is vital when someone donates an E-Type Jag, less so for a few random bits of metal, but better safe then sorry. If anyone decides that these are worth millions (they aren't) then at least the museum can prove that they really do own them.

After this I was free to have a quick wander around the museum and ogle some of the other prototype vehicles on display. I wonder how many of these my friend had a hand in building? 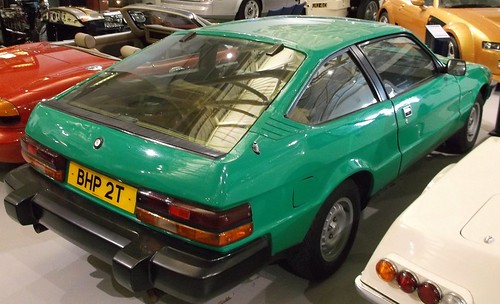 That is one gorgeous rear, shame it wasn't put into production. I have a lot of love for the MG SV in the background, with the right marketing department, that could have put MG back on the map as a sports car builder rather than just rebadged rovers.

I was already aware of the Lynx name being used on trucks - but cars? I'd never heard of one by that name.


To be honest, when I started reading about a Leyland Lynx, I initially expected to see some stuff about a single deck service bus - with a jerky transmission.

I actually liked those things even less than the National (which they replaced) - and I didn't like them very much because, together with those dreaded converted breadvans, they saw off Bristol REs in my part of the world.


Saying that, I wonder if killing off the TR7 fastback - whatever it might have ended up being called - was as bad an idea as some people might think.

OK - from some angles - the TR7 might look good - but, even if you ignore all the jokes about 1970s build quality, was the TR7 ever the most practical of vehicles? I also wonder how many TR7 fastbacks they would have sold.

Would the things have been seen as a welcome option?

Would they actually have been seen as rarely as possible - or, preferably, not at all - except as an unwanted distraction that might have served to debase the "brand"? (Here, I'm thinking about the reactions of some US fans of Ford Mustangs - on some online forum sites - to suggestions that somebody might have been thinking of offering a station wagon version of their favourite "pony car".)


I'm not sure what to think - and I guess I'll never find out.

Probably just as well, in the circumstances.