May's issue of Hornby Magazine is where I finish off building the Craftsman ex-LMS 1P kit. It's a good looking loco that could well have been announced as a forthcoming RTR model by Bachmann as they seem to be into tank engines at the moment. We were worried that this could have happened as the new catalogue appeared while the articles were "on the books" but not yet published.

Fortunately, this didn't happen so if you want a pretty 0-4-4 then it's off to the workbench for you with a hot soldering iron and some chip forks! 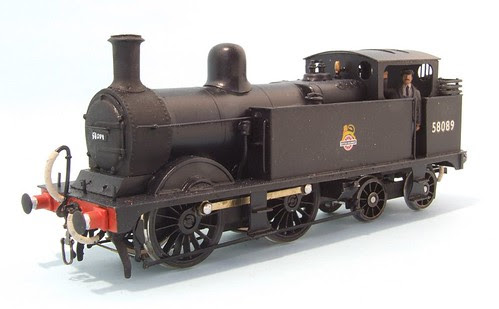 Clayhanger Yard continues with building a Skytrex small goods shed. Tempting as it is to go for a massive model, the layout will look better if we use a small structure. I liked the corrugated iron and slightly industrial appearance anyway. 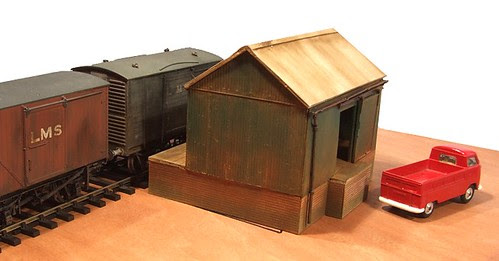 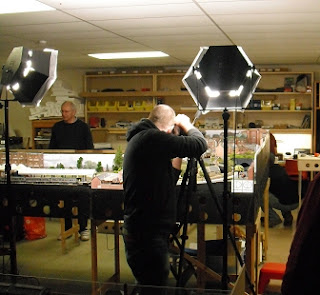 Elsewhere you'll see the first appearance of the L&WMRS layout Duxbury in print. An interesting model put together by a team of relative novices.

They've done a good job though with a particularly impressive townscape made up entirely of cardboard buildings. It all goes to show that everyone can have a go at railway modelling and produce results they can be proud of.

I shall go and buy a copy...this looks very interesting. The last 0-4-4 I built was a 4mm scale Dornoch tankie from a Jidenco kit...a lovely thing, but very tricky to get the weight distribution right. I wish I had a lighting rig like the one in your photo!

Mr Wild's lights are impressive aren't they? On the other hand the battery compartment of his camera is held together with sticky tape...