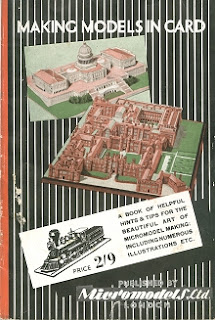 This little book, and it is little at 19 X 12.5 cm and 33pages long, is one I've been after for a while. Long out of print, acquiring it has been a game of watching eBay and waiting for one to appear that hardly anyone notices. The going rate is around 15 quid but I did a bit better than that.

To start with, I ought to explain that Micromodels were tiny card kits. Each one is supplied on a series of 9 by 13cm cards. You have to cut the bits out, form them and stick everything together.

A couple of years ago, I failed to build a lifeboat kit from the range.

Popular in the 1950s and 60s, they were killed off by Airfix kits which were a whole lot easier to assemble and looked better when you'd finished them .

Despite this, there is a following out there for the kits. I suppose it's mostly collectors trying to hoard original examples for some reason, but I'm sure there are builders too and that's who this book is aimed at.

The book opens with a potted history of the range along with a few words to explain how wonderful they are. By page 6 though, things have settled down and we get some goo practical instruction. For a start there is the simple but essential point that you cut down the middle of the black line around a part. With models this small there isn't much scope for error and being the right side of a 1mm wide line matters.

My efforts with the lifeboat might have born fruit if I'd read the part on forming card around warmed and slightly damp tea spoons. Apparently the warm spoon helps set a curve in the card - it will cockle but this can be flattened with the same spoon.

While a scalpel is recommended, there are also instructions to help the reader make tiny knives for fine work from cast iron knitting needles. No, I didn't know these existed (plastic or wood surely?) but if I find one, I can now sharpen it and then heat and quench to produce a hard cutting edge. To be honest, I think I'd probably have to practise a bit here as I can't anneal metal properly never mind heat iron up to straw colour.

Some of the work is terrifyingly detailed. Rigging a galleon 10cm long looks like hard work but it would be a lot easier if you make stiff threads by hanging them, covering in glue and letting dry and finishing with sandpaper. That way they stay straight but don't have to be under tension.

The makers aren't too proud to suggest replacing card bits with alternative. Rubber tyres from electrical insulation anyone?

All in all, a fascinating little book that despite its age, is full of useful tips that most modern modellers won't have ever heard of.

Try The World of Micromodels website for more info and pictures.

I can remember as young lad sitting in a caravan near Barmouth making several of these with round nosed scissors and paper glue from Woolworths. It didn't stop raining for two weeks except on the day we left. We all bought wellies and grey pacamacs which ment we blended in with scene as the sky was grey, the sea was grey, the beach was grey and the houses were grey. We had hoped to walk across the long railway bridge.

Good to read your Blog Phil. Have recently renewed my interest in making some micromodels I made when I was 10 years old in 1954. In searching for the micromodels book I came across your blog. Its hard to find so I will have to keep looking. Initially, along with a railway enthusiast cousin we made the micromodel trains. As he was a Master Lithographic Printer we pasted them onto the thin Litho plates, made rails buildings etc. Even wound tiny motors for them and had quite a layout. Sadly, my cousin has since passed on and his wonderful railway room now gone but many of his historical building around Nottingham are in their museum as a legacy. My first micromodel was of Windsor Castle, took ages but the end result turned out well and encouraged me in various future fields of microbiology and later electronics in the Royal Navy. The thrill and facination of making any models always stays with you. Keep up the good work of your blog and I'll continue to look out for 'Making Models in Card'
Patrick Reilly