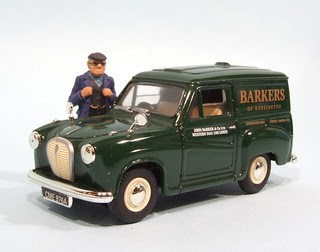 For a project I'm planning, a small 1950's motor vehicles is required. It has to be suitable for O gauge and preferably not a Morris Minor or VeeDub. As I'll probably repaint the model, something intact, but second-hand would be ideal.

With this in mind, I headed off to a local car boot sale. Several traders could help and I chose a Vanguards model Austin A35 van.

Boxed but second hand - a fiver. Similar models can be found on ebay for a tenner including postage. You'll pay a bit more if the seller has included the word RARE in the listing. As it was, I had my pick of about 20 different models for the same price.

Opening up the box, the little van looks very nice. Compared to photos of the real thing it's a really accurate model. The charismatic front end that I'm sure caused it's appearance in the Wallace & Gromit series, it looks good and with all those curves, would be a challenge to scratch build. New, there would be separate wing mirrors and number plates. My model has these fitted by the previous owner although the spare plates and mirror sprue are still in the (slightly tatty) box.

All in all, good buy. Too shiny of course but that's fixable. I'll be repainting mine so that doesn't matter.

What struck me was that a perfectly normal although reasonably large car-boot sale, I had such a choice. Were I in the market for boxed Lledo diecasts, I could have filled the back of my car for very reasonable money. 3 boxed vehicles for a fiver signs were seen on a couple of descent sized piles.

All this is lovely for me but must be dispiriting for a collector. When you look at a stall that bears an uncanny resemblance to the cupboards in your collecting room and you realise that you paid full price for the contents, how do you feel? Can you avoid the realisation that collecting things sold as collectables isn't the road to riches you might have thought? Might it even persuade you to release your little cars from their boxes and enoy them?

To cheer everyone up after that, here's a random picture of a different Austin I spotted while booking the car in for its service. 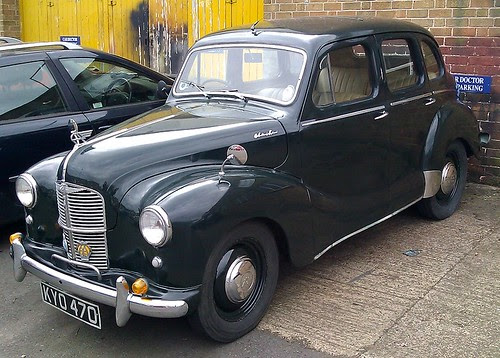 Couldn't agree more with your sentiments about collectors...the ultimate non-hobby. It's an amusing irony, all those "collectibles" piled up cheap. Perhaps I am being too harsh, but I never could understand the appeal of just looking at something in it's imitation wood presentation box with limited edition gold foil stamping. Much better to let it rip around the layout. Toys are meant to be played with!