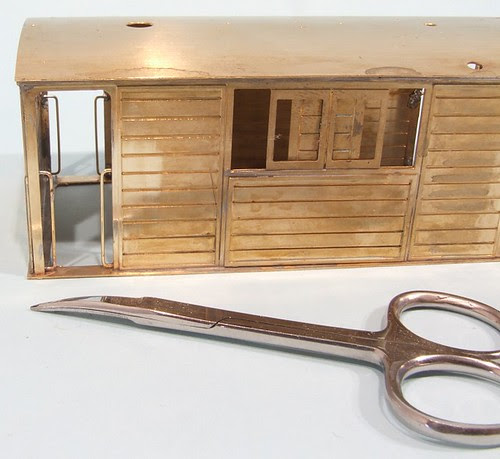 Detailing time on the Y6 Tram and that starts with handrails. The good news is that we don't have any stupid curved things encasing boilers in nigh-on-impossible to bend flowing curves. We do have 8 cab door handrails which aren't the most fun things in the world to make up since they all need to be identical.

Soldering them in is made a lot easier by the manufacturer half-etching guide marks inside the tram body. Poking the iron in through the doors is less than fund though and I have a nice burn mark on my little finger where I tried to prod the wrong thing.

Having said that, they are all in, perhaps a little further into the doorway than on the makers model but not bad according to some photos I've seen. Once painted black I don't think anyone will spot this and I am not going to adjust them all again. Done that already.

The scissors are the answer to the question, "How am I going to remove the half-etched supports that kept the doorways square?"

Curved nail scissors from Boots, they are proving very handy indeed for model making. Sharp and strong, you can get them into all sorts of nooks and crannies. They will trim very thin metal and plasticard flush to an edge. I dont' think anyone sells a "proper" tool for that.
Posted by Phil Parker at 6:30 AM