Off to sunny but freezing York this year. Passed lots of snow but luckily, none of it on the motorway. First stop inside, the cafe for an average cup of tea and very nice slice of lemon cake, well you need it after a two and a half hour drive don't you?

There was, as usual, a lot of chat. I spent some time discussing colour theory with Aiden Campbell and admiring the incredible miniatures he produces. Robin Hood on a pin head is pretty impressive!

Layout wise, I don't think I could pick a "Model Phil would like to build" as there were several.

Albion Quarry was experiencing major electrical problems but it didn't matter much to me as I thought it looked fantastic. The colouring of the stone was very good and the rolling stock just the sort of thing I like. 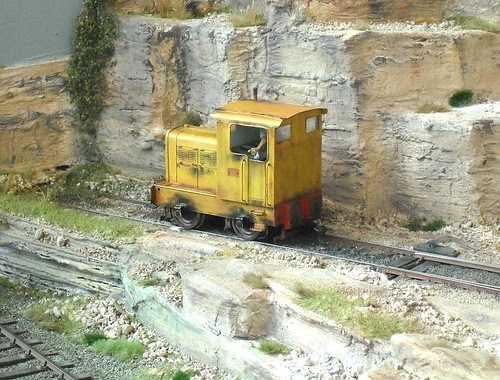 Anyone feeling like I did could have bought the model as it is up for sale. I suspect the gremlins might have put a few off but they shouldn't. Re-wiring would be easier than the model making! 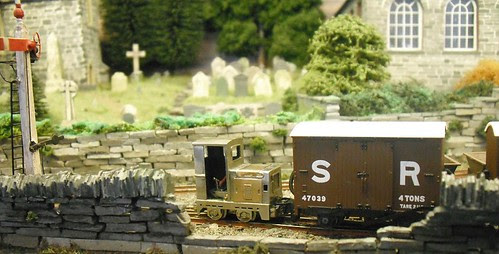 Corris reminded me of Pete Kaizers larger scale version. It's a very well presented model with a fascia that looks like a platform awning and some nice model making. Peco 009 RTR stock was being tested with an impossibly small Ruston loco. Fortunately, most of the trains were genuine Corris stock. The compact nature of this station makes it an attractive model, especially with the curves over the river. 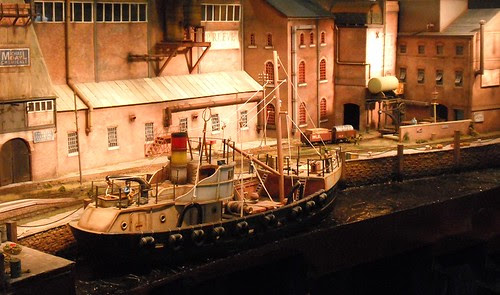 Whiteoak is also narrow gauge but 016.5. Massive buildings surround the scene and give the layout real presence.

Colyer Street station is based on Minories and has plenty of  1970s atmosphere. The number of blue diesel period layouts present was noticeable. Maybe the trainspotters of that era have grown up and can afford to model the period they fondly remember from sitting on the end of platforms. 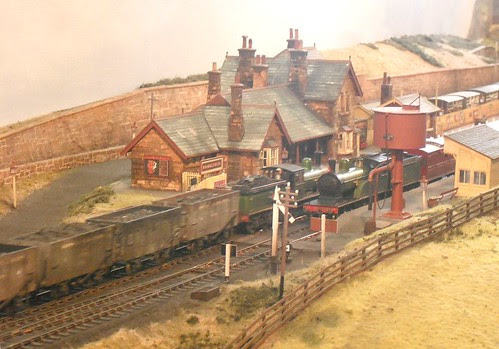 Finally, I must mention Bramblewick. It's last outing may well be remembered as much for the difficulty viewing due to the crowds as the beautiful scenery.

One feature this year was the number of chunky DCC controllers in use. Many small layouts seemed to be operated with them and I'm not sure that they are helping. There's a lot of button prodding to operate the correct points and select locos. Maybe it's me, but I still prefer a proper DC panel with a mimic diagram.

An excellent show as usual. There's more photos, some of which see me playing with the sepia filter when the lighting didn't help me out with the correct colours.

York photos on Flickr.
Posted by Phil Parker at 7:00 AM