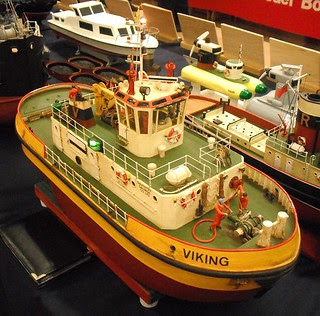 Armed with a great big shopping list, we headed off to Coalville to the second National Model Boat show.

Held in the Hermitage Leisure Centre, the approach isn't great. The council decided to build the thing at the end of a poky side street with 2 lanes of traffic and parking down one side leading to some "interesting" decisions about whose right of way is the single line of available roadspace.

Inside, the hall didn't seem as busy as last year. One of the larger traders wan't present and a seating area replaced some of the model boat displays. Despite this, there was loads to see and after a couple of hours we'd collected everything we had expected to find on the shopping list.

Chatting to one trader, it seemed that the Saturday had been busy and good money was taken. Any reservations I might have are more than outweighed by the simple fact that this is a show that the hbooy needs - timed ahead of the sailing season and ideal for anyone wishing to pick up bits to finish winter projects or tidy up boats being brought out of store. 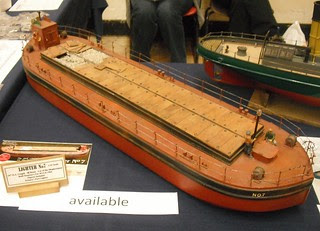 If you were after a new project then there were plenty of kits on sale and a fine selection of ready built models. These were all priced to sell and I was surprised how many were left by Sunday lunchtime. The same couldn't be said for the vendor hoping to off-load a 40mhz 4-channel set for only a fiver less than a brand new 2.4ghz set would cost you - and you wouldn't need to buy crystals!

On display were a fine selection of model boats, many of which I don't recognise from other shows. Perhaps because of thier protability, there were more work boats than warships but that's fine with me a those are the models I like.

One ommission was a pool. Apparently there was one outside that had been used on Saturday but I was told it was empty on Sunday. Persoanlly I didn't care much. A pool in the hall would have been nice but no one seemed to miss it and this makes me wonder just how essential water is in a model boat show.

Worth the trip as far as I am concerned. If you are a model boat trader, I'd recomend booking space there next year. If you like taking money that is.

Photos from the show on Flickr.
Posted by Phil Parker at 7:00 AM