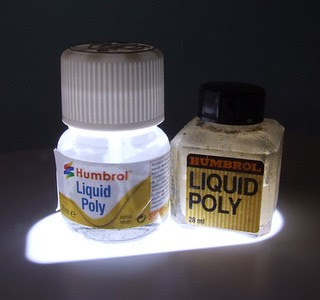 Over at Iain Robinson's blog, there is tell of a disastrous accident involving some liquid plastic glue.

Liquid plastic solvent is nasty stuff - it has to be to do its job - and knocking a bottle over is a nuisance that nearly every model maker has experienced. Normally the problem is a bad smell and the annoyance at wasting some useful glue. Very few of us have (thankfully) experienced Iain's catastrophe.

Anyway, this got me thinking. On my bench are a couple of glue bottles. The older one on the right contains Slaters Mek-Pak. I decant this using a pipette from the man-sized bottle bought over a year ago.

The brush seems to stand up to the solvent, something that couldn't be said for the old nail varnish bottle (pinched from my sister, honest) that I'd used before. Cosmetic companies just don't think of modellers when they do their R&D. If they did then the applicators would be made of sterner stuff and not fall apart after a year or so.

The advantage of the nail varnish bottle was that while it wasn't that stable, if it fell over, there wasn't that much liquid to spill.

On the left is a modern bottle of Humbrol Liquid Poly, complete with child-safe cap. I don't know how many years separate the two packaging examples but obviously in the old days children learnt the hard way that drinking plastic solvent was fates way of telling them to STAY AWAY FROM MY AIRFIX KITS.

Testing the bottles using the same technology they use for London double decker buses, both bottles were happy to stay upright to 40 degrees of lilt. Hopefully enough for most of us, and meeting the legal requirements for carrying passengers too. 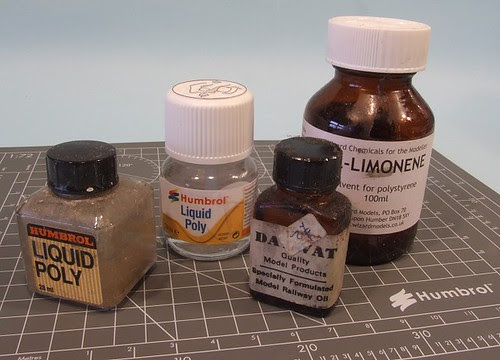 In fact, most of the glue to hand seems to be fine apart from the vicious ancient bottle of Daywat which is in one of those narrow brown bottles. These are the ones that magazines love as you get to run articles telling modellers how to make a holder out of wood or plastic sheet every few years.

The Limonene bottle will tip before the others but since the smell is pleasant I don't care quite so much. Mind you, it's heavier so more stable when force is applied dynamically by a careless knock.

All this of course isn't solving Iain's or anyone Else's problem. What we need is a container that can't be knocked over. Luckily, this has been a problem for others before us and the solution is simple.

Put the solvent in an inkwell.

Nice big base. Lid to contain the smell. Glass liner that won't be affected by chemicals. Gentlemen and Ladies, this is what we all need on our workbenches: 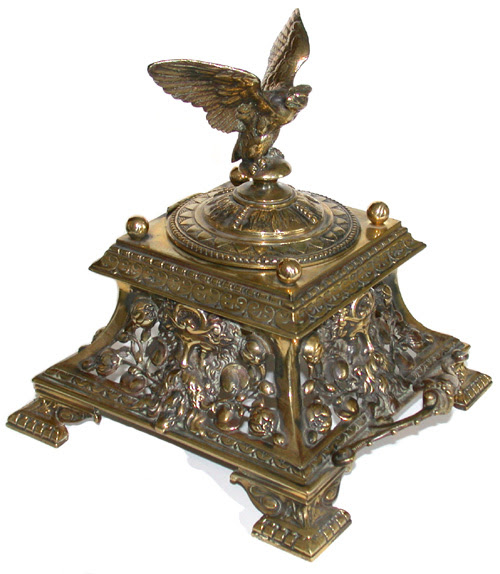 I once spilt a bottle of Liquid Poly, right next to a Parkisde Mineral Wagon that was resting on its side. It pretty much annihilated all the door detail, not to mention making me a little dizzy.

These days I keep my liquid type glues in an old mug when opened......

I've had a couple of problems with Humbrol liquid poly bottles, including a broken cap. I was also caught out when I accidentally left a closed bottle under a foamboard baseboard for a couple of days and the fumes distorted it