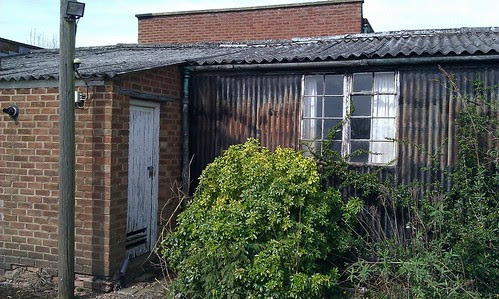 I spotted this unassuming but character-full corner view over the weekend and couldn't resist a snap with the phone.

The first thing that caught my eye was the weathered corrugated iron. Presumably once painted black with a bitumen paint, this has worn away over the years to leave a mix of bare metal and surface rust. In model terms, I suspect the later could be dry-brushed on but it wouldn't be the Humbrol red stuff, nor one of the orange versions that are so popular with people now. It looks dark brown so I'd be inclined to go with Track Colour, perhaps with a hint of orange if you really must.

The roof is asbestos sheet but instead of being the traditional creamy colour, it looks very much like pale grey - Number 64 I think. Sprinkle some Humbrol smoke (other off-black powders are available) on this and it would probably look about right.

The brickwork is 1970s I think and stretcher bond. A bit orangy again but mostly red. Despite its age, the mortar is pretty clean but then the building isn't near industry and this bit faces onto a car park. The window is a typical steel-framed unit. Scribing lines onto plastic and filling them with No.147 (very pale grey) ought to do the job. I'd paint the door at the same time.

The shrubbery - you're on your own with that.

For those who are interested, the building is Whitnash Sports and Social Club, this side is near the  petanque courts.
Posted by Phil Parker at 6:30 AM

Email ThisBlogThis!Share to TwitterShare to FacebookShare to Pinterest
Labels: buildings

Some are available in the UK from http://modeltextures.co.uk/ and I'm playing withe some brick ones now. They would seem ideal for corrugated buildings where in the past I've used the Wills clear version

James - Very interesting. I might have to see if I can get hold of some of this and see how well it works. Thanks