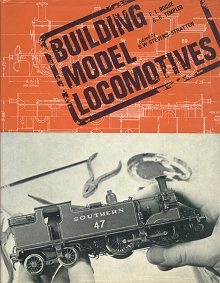 Since all the cool kidz (if you can call Iain Robinson and CF that) are reviewing old model railway books, I guess I'd better join in with one from my archive.

Young Phil didn't have much cash but he did enjoy access to Leamington Library where he discovered Building Model Locomotives by FJ Rocje and Col GG Templar. On the basis that it was cheaper to make everything myself, I reasoned that despite being old-fashioned, it assumed there was very little available to buy so you had to scratchbuild.

The book is based on a series of articles published in Model Railway Constructor between 1947 and 1951. The book itself appeared in 1968 although I have the 1970 edition. The text was revised before publication by SW Stevens-Stratten FSRA who had his work cut out with it being 21 years old by the time he started. Once example of the changes is the removal of "Spirit of Salts" for soldering in preference to multi-core solder. There's no mention of plastic not 2-part epoxy so even then the text was treated as a bit of a museum piece.

As well as explanatory text there are a wealth of drawings showing prototype bits like firebox doors and chimneys that don't always appear in detail on normal plans. There's a lot on valve gear too with all the main flavours drawn and described. 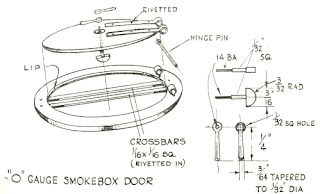 There are some assumptions that date the work - the models tend to be O gauge and any mention of motors includes the massive devices of the time.

This is a book for the unashamed scratch builder. There's an awful lot of good solid information in it and for the modern modeller a lot you might struggle to find elsewhere. Geoff Holt's recent book does this now but I don't see any problem owning this as well. Put it next to the Guy Williams books on your shelf.

I'll be honest, like Geoff's book, the idea I could follow this and produce anything as detailed or properly engineered as anything on the pages is a bit of a myth BUT that doesn't mean I can't enjoy the read. Young Phil was persuaded that even with no money he could make things, mainly in 16mm narrow gauge, which kept him modelling where believing that everything had to be bought in might not.

Building Model Locomotives through Amazon resellers
Posted by Phil Parker at 5:30 AM

I like the idea of being a "cool kid"...lol - something I certainly have never been! Yes, I love this book and have had it on my shelves alongside the Guy Williams book, which for me, is the inspiration. I was thinking about Geoff's book, though. You can never have enough inspiration. I'm not much of a model engineer, but diagrams and sketches such as in the Roche book really get my mojo going. Like, Yo, dude...

How much is this book

How much is thisbook