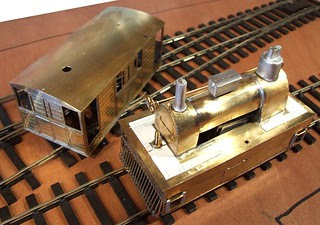 Because I've been messing around with the tram loco, the etched floor parts aren't quite right. I could have modified them but instead decided to make something new.

My first though was to do the job in real wood. It's authentic but to be honest, I doubt anyone would notice and plastic sheet is much easier.

Before this, I remembered to solder the chassis retaining bolts in place. I'd hoped to use the electric iron but there's a bit too much brass around for that to work quickly so I blobbed them into place and blasted the solder with a gas flame. As hoped, it melted before anything else had the chance to get hot and fall apart.

The sharp eyed will notice that the treads are covered in CD marker and oil, which seems to have stopped the fixings soldering up into a solid lump. Hurrah!

The floor was cut and scribed from plastic sheet and then cut down to fit. To be honest, there's more been cut away than used but them's the breaks.
Posted by Phil Parker at 6:30 AM