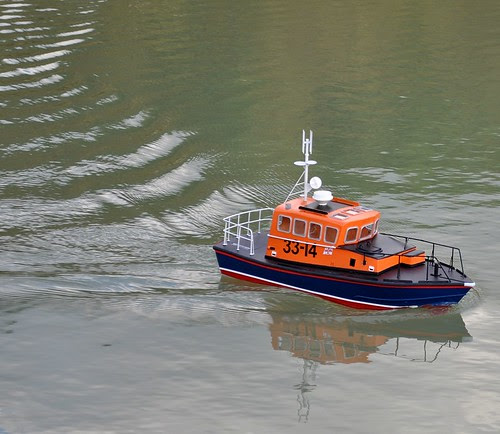 Producing a model of a Brede Lifeboat has been on my agenda for a few years now. Regular readers will also know that I've been trying and trying again, to very little effect. Until now.

Thanks to several late nights and a looming deadline, the 1:20 scale Brede took to the water for a few photos on Saturday evening. The sun was out (lucky, there had been hail earlier in the day) and shining at a nice low angle just right to bring out the best from the Volkswagen orange paint.

Completely scratchbuilt apart from the radar dome on top and mechanical bits inside, I know it's not perfect, any hopes I had to making a mark on the Model Engineering competition later in the year are long gone, but even though I know the faults I'm still very happy with it.

A fuller description of the build will appear in a future Model Boats so watch the magazine rack at Smiths to find out more. For now, I'm going to bask in the smugness that of actually producing a model and look forward to the first post of the new year when I finally won't have to mention the Brede in the uncompleted section of my annual report.
Posted by Phil Parker at 6:30 AM