After 25 years, even when stored on the dark, plastic sheet can become brittle. At least that's my excuse for the damaged barge board on the stone warehouse. If the plastic had been fresh, then when I whacked it while moving the baseboard around, it wouldn't have broken would it?

After pondering filling the hole, I decided replacement would be quicker. Partly this is because the sheet is very thin but mostly due to the Deluxe Materials filler being dried up in the tube.

Carefully carving the old bargeboard away with a knife, I was surprised to find we'd not continued the stone effect to the edge. No idea why, but it was a long time ago. Anyway, holding the sheet against the roof allowed me to work out the replacement size and this was glued on with solvent free UHU.

A coat of track colour followed by a wash of Humbrol 66 and you'd never notice the repair. 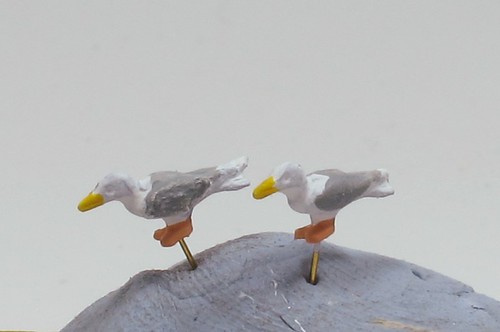 On the back of the layout there are the words "7 seagulls" written in permanent marker. Shortly after we started exhibiting the model, people in the crowd started counting the sea birds and asking if they had seen them all. Since we couldn't remember how many there were supposed to be, we wrote it on the backscene.

It's a good job I counted them again as one had gone AWOL while in storage. The birds are Springside castings so I've painted a replacement and a spare for the weekend. I'm not going to tell you where it will land, that would spoil the spotting fun...
Posted by Phil Parker at 5:30 AM