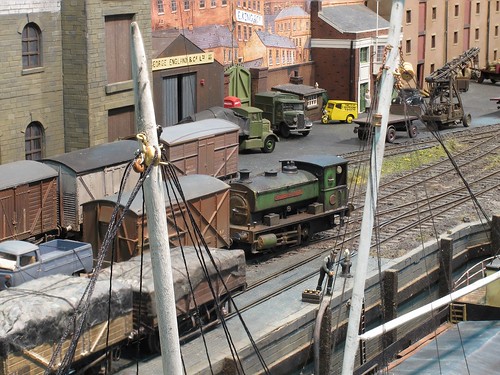 The Barclay was one of my Hornby Magazine projects years ago and while it looked great, I'd never actually tested it other than a couple of trips up and down a straight test track to prove that everything worked. Now fitted with new couplings, this could change.

I was genuinely interested in how this would work. There is an old thread on RMWeb where several people decide before building the model that DJH don't know what they are doing and re-work the chassis with a new drive system. That rather defeats the point of an easy-build kit aimed at beginners to my mind - if all you want is a Barclay kit then there are plenty of etched alternatives that are cheaper and possibly more detailed.

Not that this is unusual on t'Internet. For years I've been a member of a VW camper forum where various readers have removed heating control bellows and disconnected cooling fans to replace with electric versions. Others then point out that they are assuming their engineering skills are better than those on offer to Volkswagen. If they could have left bits out, they would have done (changing the boot lock button from chrome to plastic saved millions) so it might be a good idea to undo the "improvements" forthwith.

Anyway, my "vanilla" Barclay was lightly lubricated and set up on one of the fiddle yard roads. It spent Saturday shunting away happily, never missing a beat. There is a slight squeak in reverse but I have a feeling that some grease on the gears will sort that. It's not bad enough for me to have fixed it immediately.

Conclusion: This is a good kit that works well if you build it following the instructions. Ignore the people who tell you you must rip out the innards. Keep it simple and enjoy the loco trundling around. You can make your second build complicated if you must. Just finish the first one - it's more than most do.
Posted by Phil Parker at 5:30 AM

Mine's in that thread (green No.3 on page 2). Its a very nice kit.
I can't see the point in messing with the drivetrain either, it works well as is.

One comment that I once saw elsewhere on that forum when I mentioned said kit went along the lines of 'I'm not spending 100+ quid for something that I'd have to build myself'. Ho hum.

Someone is missing out on the best feeling that you get in this hobby - watching a loco you have built running on a layout. His loss...