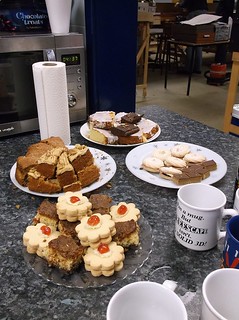 Cakes, cakes everywhere. That's what I had last Saturday.

Tradition has it that 2 weeks after the exhibition, the Leamington & Warwick Model Railway Society holds an open day at the clubrooms. All the layouts are up and working and the members are asked to supply cakes to feed the visitors.

Quite a lot of them did as they were told and I found myself manning the kitchen surrounded by cake. That might sound like heaven but even I can only eat so much. Mind you, we had so much - the ones in the photo are just the tip of a large cakeberg - that even I couldn't have made much of a dent.

Everyone gets to come in for free and it's always nice to see that plenty of people. The idea is that we attract some local modellers who might be persuaded to give club membership a try. All clubs need to attract new people as there's always a little bit of churn with some moving away and other, sadly, dropping off the twig.

Anyway, I learnt not to open the top of the tea urn and immediately turn the tap above it on. And that it's difficult to keep the tea pot topped up when you keep having to stop and stick a steamed thumb under the cold tap.

Other than that, the layouts ran, people enjoyed themselves and we got through pretty much all of the home made cake. This left about ten bought in ones with longer shelf lives for the following weeks club meeting.

If you are based in the Midlands and fancy finding out more about the club, visit our website.

For the rest, well, there are some photos on Flickr and I shot a bit of video showing our O gauge layout.

I'm surprised no-one has made cake layout. Say a 12 inch cake with a circle of narrow gauge on the top, with edible scenery.

Setting-up might be interesting, but taking down would be tasty.

Though with the amount of cake that gets eaten at shows the layout would be lucky to last to midday.

That sounds like a good idea to me. Could be popular too with a mix of model railways and baking.

I think a group of people built a full-size model of a Skoda car - out of cake - for a TV advert.

The trouble was that this took quite a while to do - under hot lights - so I wonder exactly how edible it would have been at the end of it.