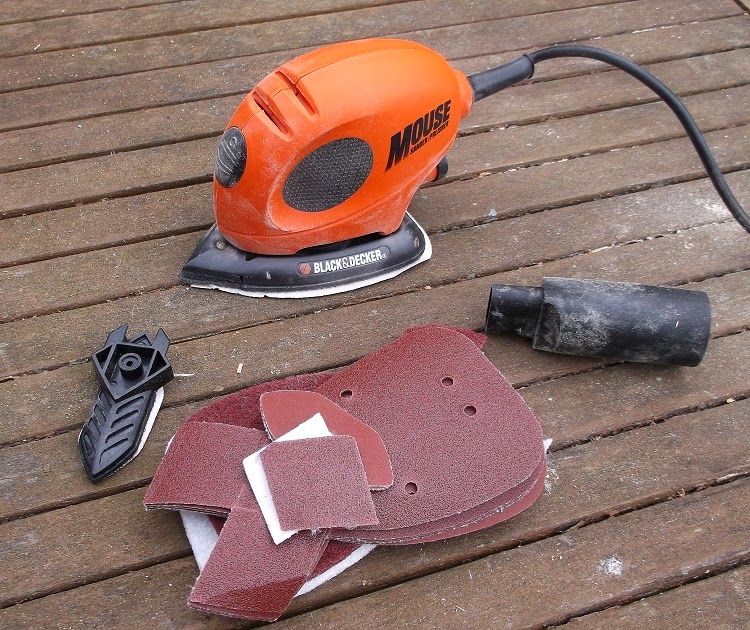 Here's a handy hint - if you own rechargeable power tools. Try not to lose the charging device.

I have a very nice detail sander tool. Paid a whole 2 quid for it at a car boot sale and then used the thing for several year on all sorts of woodwork.

For those who don't know the terminology, a detail sander is an electric sanding device that has a pointed sanding head and can get into all sorts of nooks and crannies. It's also ideal for small sanding jobs in confined spaces.

Sadly, no charger means one of my favourite tools is no more than a paperweight. I'll keep it in the hope that the charger will turn up again one day but in the meantime, it has been replaced with a modern version - the Black & Decker Mouse.

For a start, the thing hardly vibrates in the hand. I assume this involves some sort of magic as the sanding pad is thrashing away underneath.

Pads are attached with Velcro and each comes with three diamond nose sections. Someone has realised that you tend to wear the front part of the pad faster than the rest. Better still, an extended nose is included in the box so you can really poke it into confines spaces. Various grades of sandpaper are included as well as Scotchguard pads.

The only control is an on/off switch hidden under a rubber cover on the front. This is a rocker switch rather than push button which is a bit confusing as you push one end of the cover for on and the other for off. While this is moulded in to the rubber, it's not obvious when poking around with your finger.

The only other issue is the dust extractor pipe doesn't fit a Henry vacuum cleaner. I don't think you can buy an adaptor either, nor does lashing things up with gaffer tape appeal.

Apart from that, it's a tool I would recommend.

No car/boat/plane modeller these days is without an 'intelligent' battery charger, capable of charging LiPos, NiMh, NiCad, Lead Acid, etc in any multiple of cells.

I have used mine to charge a Dustbuster, mobile phone batteries, and a laptop as well as the usual power packs and R/C batteries. It would have no problem with your detail sander...

Sounds interesting - care to recommend one?

I don't know about recommend - I only bought the cheapest one I could find! iMAX made the original market leader. I bought a cheap copy from Giant Cod as was - the nearest match I can find currently is:

You plug it in to either mains or a dc power pack of some kind - a car battery on the field, perhaps? I usually use a laptop charger. Then you plug in whatever battery you want to do something to. You get a lot of charging leads.

It will do a controlled discharge, cycle charge or a straight charge for Li-ion, LiPo, LiFe, Ni-MH, NiCad, lead Acid, Gell cells, and you can set up any number of amps/milliamps that you want for any number of cells and view the capacity of each power pack. You can set it to stop when the battery starts to rise in temperature... As a charge happens you can view the voltage - I see that the example one I show has also got a battery internal resistance checker, a brushed motor driver, hot wire cutter output and brushless motor RPM checker....