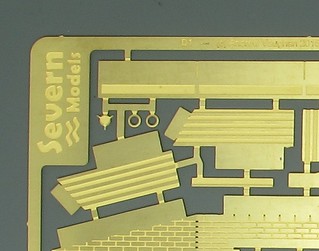 On a brief foray around the Leamington show, I spotted a new trader to me - Severn Models.

The firm produces a range of building kits in etched brass. Cost usually precludes employing this material for anything as large as a building, although several people have done it. It's certainly unusual to see a complete range produced for commercial reasons as opposed to being something the designer wanted and then decided to sell afterwards.

Most of the range is 2mm scale but they are now offering some models in 4mm.

One of these, the brick line side hut, really appealed to me. Firstly, it looks good - nicely atmospheric. Second, the idea of an etched building more complicated than a shed appealed to my sense of curiosity. OK, I could make the thing from card and plastic for less money but I like to try different types of kit.

Back at the workbench, a leisurely couple of hours folding with cheap square ended pliers and soldering saw the basic model assembled. According to the instructions, glue assembly is possible but I prefer solder. I can see adhesive would work though as there are generous tabs and flaps, no trying to glue the thickness of a brass sheet against another here.

One hint - be careful with the chimney. If it falls on the floor, you'll never find it. Good job I had suitable brass wire to hand.

Everything went together perfectly with no fettling required. There are complicated parts however, the door frame involves more components than you might expect but it's fiddly rather than difficult. 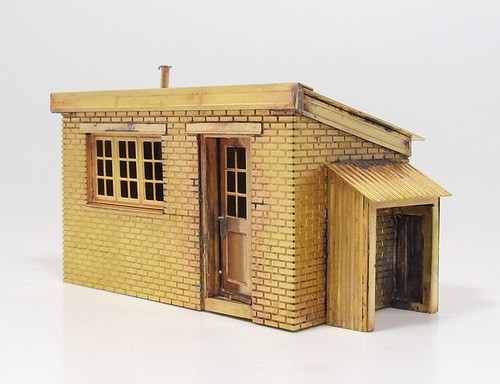 I've seen the sheds before on Mark's blog: http://caffeine-train.blogspot.co.uk/search/label/Severn%20Models
They look pretty good in 2mm scale, not sure how well they'd scale up to 4mm though.

I built the 2mm sheds (both brick and wood) and agree they are excellent kits. I also went the solder route, apart from the barge boards which I couldn't keep square while soldering to resorted to glue. Hadn't seen they'd moved into 4mm kits though, so will have to check those out now I've moved from 2mm to 4mm scale railways.

Trouble is, a brick lineside hut is likely to have been a 9" wall, therefore should be of English or Flemish bond. This is Stretcher bond and I very much doubt that it would have been a 4 1/2" wall. P/E would have been the easiest way to show correct bonding around windows and door. An opportunity missed.

I wondered about the brick bond but assumed that as the hut is relatively modern (1960s I guess) then there is a chance of a single skin wall. Happy to be corrected though.

Also, I have noticed graphic designers struggle with brick bonds. This isn't the worst case by far...