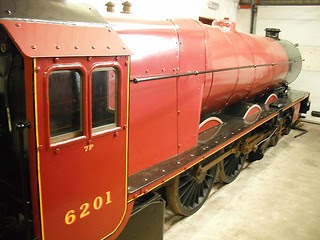 A surprise find at Midland Railex a few days ago were some ex-Butlins railway engines. Not the big ones that everyone knows about, but 21 inch gauge models of Princess class locos that ran around various of Billy's camps.

Two engines, built by Hudswell Clarke & Co. Ltd in 1938 were used to transport and entertain inmates in the holidays camps. Rather than expensive to operate steam , they are powered by diesel hydraulic engines. I suspect this would have been cheaper to purchase and certainly more suitable for operation by paid staff. Volunteers might enjoy getting up at the crack of dawn, covering themselves in dirt and working a long hard day but in real life you just want to come in, start the thing up and get on with the job. The public wouldn't have been that bothered anyway - if they wished to ride behind the chuffer then the real railways were full of the things.

Actually, it makes me wonder a little why people enjoyed the miniature train ride. At this time when you wanted to travel a long distance you had little choice but to use the train. Very few people had cars and those that did would spend much time tinkering an fixing them en-route. Without motorways, the journey by road wouldn't be as swift (everyone who's ever sat on the M6 or M25 is now laughing) as it is today.

Whatever the reason, the little engines were well worked but eventually sold out of use 40 years ago. Eventually they ended up at the Midland Railway Centre alongside the real Princess Elizabeth.

Holiday camp railways and miniature lines in particular are an under modelled subject. Probably the best known (to me anyway) example is Shifting Sands by Colin Peake. It's not as easy as you might think to do this. Real miniature locos aren't exactly the same as their full-sized brethren. Liberties have often been taken with the proportions and frequently you find that it's a completely freelance design. At the very least, tenders will be designed to accommodate a driver rather than coal. Thus, taking an N gauge loco and sitting a 7mm scale driver on top won't cut the mustard. You'll need to get hacking and wield the plasticard.

History of the Butlins minaiture railways