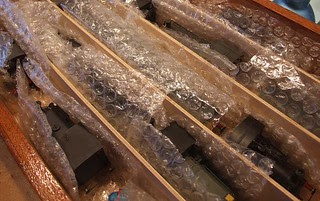 Anonymous writes a few days ago in the post on getting read for Midland Railex: Phil, it looks like you store your locos in bubblewrap?

It's true, that's what the photo of stock looked like and it's not far from the truth. My stock boxes are wooden with plywood dividers. They were specially made for by a friend who mass-produced them for several club members many years ago.

On the appointed evening, John would turn up with a pile of bits which you would take away, varnish and assemble. If you had measured correctly, the resulting box fitted your models perfectly. If you didn't, much merriment was made at your expense...

While probably the best boxes ever, those wooden sides won't do much for the engines paintwork so I wrap each one in a slip of bubblewrap. It doesn't seem to damage the models and stops them sliding around in transit. Packing the box is a heck of a lot quicker than trying to put individual models into their own boxes too.
Posted by Phil Parker at 6:00 AM