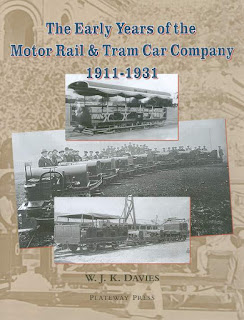 A proper reference book this one. With my interest in slightly odd-ball railways, it was inevitable that I'd pick it up.

Flicking through, the first thing that grabbed me were the huge number of plans. Proper, clear plans for the many Motor Rail product. Plans that cry out to be used to produce a scale model.

In addition, the book is profusely illustrated with well reproduced black & white photos. If you are a model maker then these are a book and since many of the locomotives are double ended, you could probably just work from this one book without filling your shelves with anything else.

The history is comprehensive but to be honest, I found the text a bit on the dry side. I really can't argue with the quality though. My feeling is that Mr Davies really knows his stuff. It reads like a labour of love.

As well as the details of many machines, the backbone of the text is a history of the company itself, or perhaps I should say companies since the lineage is pretty tortuous.

MR&TCC certainly produced a huge variety of machines. The most famous were armoured narrow gauge locos that served during the first world war and then returned to provide cheap motive power for may UK lines. Abroad though, the weirdness really starts. A motorised hopper wagon seems to be the weirdest but it's a close call.

For standard gauge fans, a few shunters were produced but they were pug-ugly and rarely available in kits form. If you can get one (Impetus used to make suitable models in 4 & 7mm scales) then they were intended for a type of line rarely found in the UK - internal shunting within a factory complex or similar.

One of the bonuses is that you get a lot of useful industrial scenes in the background. Many were posed but that's not a bad thing, for the photographer the plan was to show all the equipment clearly.

In the meantime, I think I might take a look at some of those railcar plans for the garden railway...

By this book from Amazon