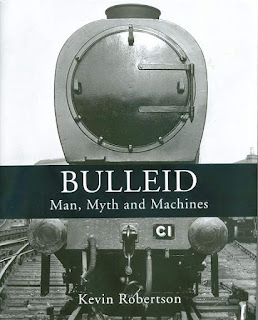 Kevin Robertson has published several excellent volumes on the infamous Leader class of locomotives that were to intended to be the biggest step forward in steam locomitve design since Stephenson. If you want to know about this engine, he IS the man.

I have read and enjoyed these so when I spotted that he'd also written what appeared to be a biography on Oliver Bulleid, the engines designer, I couldn't resist.

Nicely published in A4 hardback of excellent paper, this is a quality publication. If you buy it for the photographs alone you won't be disappointed. If you won the Leader books, then I suspect you might find some of the images used before but that is to be expected. There is more than Leader here so don't let that put you off.

The book isn't strictly a biography, it is more about trying to define the man. Constant reference is made to other works, especially "Bulleid Last Giant of Steam" by Sean Day-Lewis and this caused me a problem. I've not read these and don't have enough interest in the subject to do so. If you are soaked in Southern (and a bit of LNER and Irish) railway history then I think you'll get more out of it than I did as you'll enjoy agreeing with the author (or not) when he disagrees with previous books in the area.

Personally, I could have done without this as I'm happy to accept Kevin as an authority on the subject. Indeed, it was the one problem I had with the text.

Having said that, whet you get is a very full history. Leader obviously casts a significant shadow but there are the years before and after this beat and they are well documented. Tavern cars and double deck trains appear in both words and (lots of) pictures as does the designers time in Ireland where he developed the Leader concept into a successful turf-burning engine, sadly too late to stop the tide of dieselisation.

Pre-Leader we get experiments with the LNER and then early Southern days including the Q1, another of my favorite locos.

Bulleid doesn't get off lightly. He is revealed as a man of strong will but with the ability to persuade people even when it would have been better if he himself had been persuaded. Punches aren't pulled which makes for a balanced read. At the end of the book, the author states his position but also lets the reader make his own mind up. For my part, I have a feeling that had much of the work been carried out 10 years earlier, and had Bulleid been willing to listen to the people who had to make his engines work, then steam on British rail could have looked very different.

Buy Bulleid Man, Myth and Machine from Amazon
Posted by Phil Parker at 6:00 AM