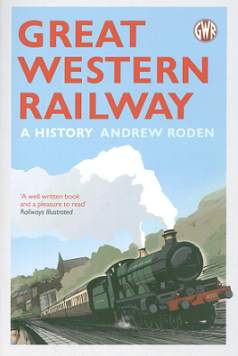 I'm not a fan of the Great Western Railway. Back in the early days of my railway modelling, the scene was infested with GW branch line termini. No exhibition was complete without at least five of the things. The fans always seemed so superior too. I could never understand it. When Steam Railway repainted one side of City of Truro in BR black and caused furore amongst them, I wasn't the only person who laughed at the pinprick to their pomposity.

Andrew Roden is a paid-up, Brunswick green painted member of the Great Western fan club. Fortunately, what could have been a dreadful hagiography is in fact a well balanced and very readable book.

Starting from the foundation in 1833, he charts its growth and tells the story of the personalities behind it. Some names will be familiar, others less so. We've all heard of Brunel but I was surprised how early he disappeared from the tale and how many great men followed him. Indeed, most of the text is the post-Brunel story.

This isn't a book on trains. The GW was much more than the sum of its engines. The network growth, (have a map handy for this bit if you don't know the south west of England) origins and eventual demise of Swindon works along with the town that grew up around it, efforts in two world wars and the last days before nationalisation. Even the arrival of BR doesn't mark the end of the story.

Both successes and failures are examined. In fact coverage of the broad gauge network was very detailed and interesting as it explains the difficult position the company found itself in and the steps it took to extricate itself from this.


Thankfully for the casual reader, this is not a technical book, hard-core nuts and bolt information has been left to other writers, but by the end even I'd worked out what all the fuss was about and why so many enthusiasts love it.

Buy Great Western Raiwlay - A history from Amazon
Posted by Phil Parker at 6:00 AM