The mobile cranes of Melbridge Dock 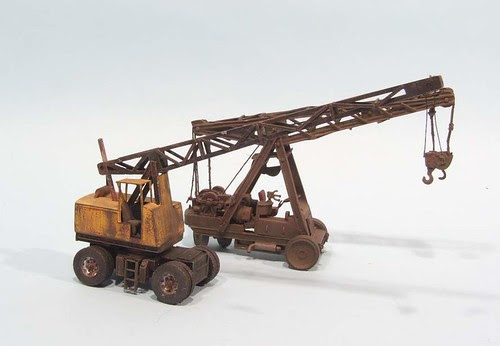 My mobile crane collection owes nearly everything to Langley Models.

At the back we have the Ransoms Rapier 6ton Mobile Crane from Langley, code RW14. Not a cheap kit but for a complicated prototype, well worth the money. The build of this model is described in February 2011s issue of Hornby Magazine - basically, it's complicated but perfectly do-able. The result looks the business and as the prototype was so common on the real railway (or maybe BR liked to show them off for the photographers), a welcome addition to the scene.

At the front is a Coles crane that has been with the layout since the very beginning. The top half is straight out of the classic Airfix Recovery set. I can't claim any originality for the conversion any more than I can remember what I did with the rest of the bits from the set. Maybe adding the cab was different from the versions people like Michael Andres produced back in the old days, but probably not.

Underneath, the crane swivels on a simple plasticard chassis mounted on whitemetal wheels picked up from the Langley pick'n'mix section at an exhibition. I can't make wheels like this and why bother, when you can pick them up for pennies ? Adding a bit of ladder and some fuel-tank like lumps was simple enough. Probably not that accurate but it looks the part to my eyes.

One trick for crane builders is to ignore suggestions of using thread for rope - try fine iron wire instead. Much easier to keep straight and hang properly.
Posted by Phil Parker at 6:00 AM

Nice and rusty Phil- for more rusty bits and mechanicl gubbins plus some toy trains in France, my new blog at www./rustynutsandbolts.wordpress.com/

You've been on my home page RSS feed since the first post. Lovely mucky photos. More than 50 shades or rust there !