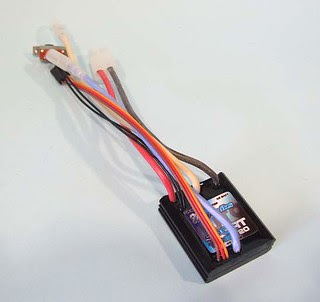 When I last blogged the Pilot boat, I mentioned some issues with the speed control - an Mtroniks unit of a type I used many times. This one wasn't playing properly.

Forward control was fine. Reverse on the other hand - well the red light indicating a radio signal lit up but the motor stayed still. After a lot of playing around I discovered that if I pushed the programing button while the light was on, a burst of backward thrust was achieved.

This is not handy. I mean, on the bench it's not a big problem but I'm not following the boat around on the water so I can reach in to push a button...

Anyway, I wondered if the unit was programmable even though the instructions don't mention it. Digging out an old set I found the sequence to push and had a go. No good. You  might think it odd that it's possible to disable reverse like this but I assure you this is the case and I have done it by accident in the past. Presumably it's for aircraft where throwing the motor hard into backward is a bad thing. Or high power buggies with hot motors. The later might not nose-dive to their doom but throwing high currents around can be interesting for electronics resulting in that distinctive smell of burney components

Anyway, the next day I called Mtroniks and was quickly talking to a technician. He asked a few questions and decided it sounded like I had an old software version in the control. Upgrades require the unit to be sent in to the makers so that is what I was asked to do. Apparently as long as you haven't wired it back to front then even replaced plugs and modified leads don't invalidate the guarantee. That's very handy for this sort of device where you are very likely to have to change plugs (I did) before using it in a model.

2 days later, in the post, a brand new speed control arrived. No questions or quibbles.

That's what I call service and one of the reasons I always use Mtroniks speed controls in my boats.