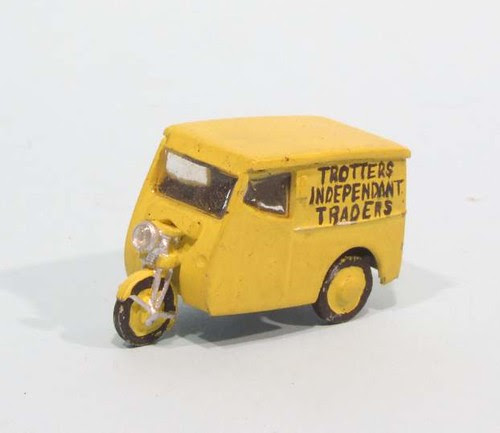 If there is one vehicle that attracts attention, it's this little Reliant van. Everyone wants to know about it and yet it's the simplest model on show. If you want something similar, buy the Dart Casting Kit, stick the bits together with superglue and paint it yellow.

Lettering is down to careful work with a paint brush, nowadays I'd use a fine pen or computer generated lettering although maybe the Trotters (from the BBC TV series "Only Fools and Horses" for the younger reader) would have skimped and painted it themselves anyway.

Please note: This is Grandpa Trotters van. The plastic pig owned by Del Boy is the more modern version of the same thing as I never tire of explaining when another punter jovially tells me I've got it wrong...

Once upon a time, motorcycle based vans such as this were everywhere. Outside any main line station in a modest sized town, you'd find a crowd of the things. Despite this, I seem to one of the few people who even knows of this vehicle, however I didn't make it up: 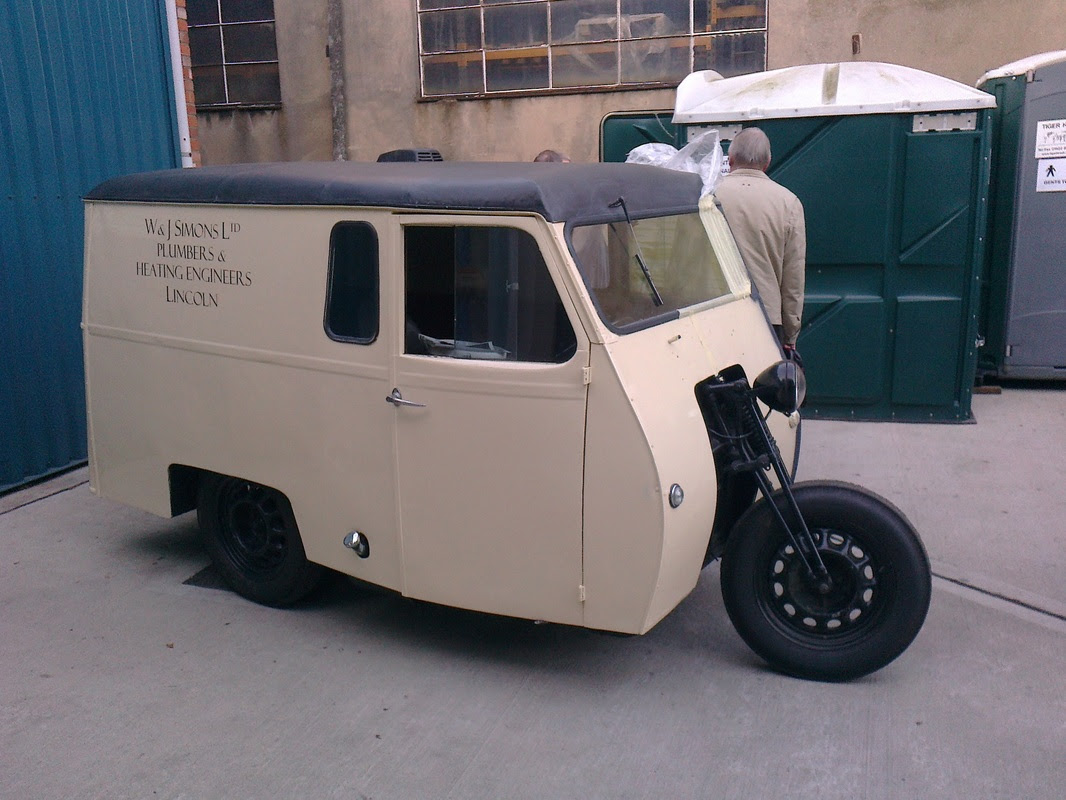 There are still a few of these on the road as classic vehicles. A three-wheeler can be driven on a motorcycle licence. I know a member of the Salvation Army who once gave me a lift in his Rialto and explained that if a policeman asked, the correct procedure for revering was to switch the engine off as part of the gear changing and then back on once in gear. Apparently, those on a motorbike licence mustn't just shove the stick across !

This explains the popularity of the vehicles - very, very few people had cars but plenty had bikes, often with sidecars. This was the best of both worlds with the added advantages of maneuverability and low running costs. I'm surprised they aren't more popular today.

Of course, this hold no sway with the sort of modeller who thinks you can research a 1950's layout by looking out of the window today. Sadly, quite a lot of the people who don't get it are of an age where they simply need to remember their youth !
Posted by Phil Parker at 6:00 AM

Oxford Diecast will be releasing a "tricycle van", including one in LMS livery:

I believe there were vehicle tax advantages to owning a three-wheeler.

Cute! I believe there were automobile tax benefits to having a three-wheeler.

Cute indeed! I would hate to be in that thing in case of a crash, however.