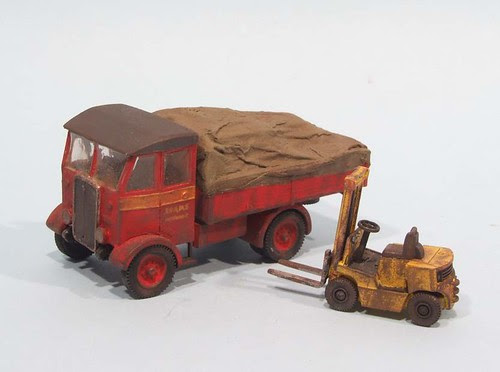 A couple of days ago, I showed lorries constructed from Cooper Craft plastic kits. Well, once you start then the kit is very adaptable. There used to be an advert in the back of Railway Modeller which showed the side and front views of a Foden truck.

While this was to advertise a kit, I reckoned that it wouldn't be too difficult to modify the ARC plastic kit to something passable. All I did was cut the cab fronts ahead of the door and bring them in a bit. The cab front was then narrowed. Finally the radiator lot its central pillar.

With hindsight, the radiator should have been narrowed a lot more but apart from that, it's not a bad effort. Behind the drivers compartment, the body has been halved in length by chopping away the rear side doors. The chassis also needed shortening.  For variety, and because it saved some modelling, the lumpy load is covered with a toilet paper tarpaulin.

The forklift is an easier, if more expensive model. Simply a kit from Viking for a nearly suitable truck that has been shortened because early examples tended to be a lot stubbier than later models. The safety cage wasn't required either because people didn't think about that sort of thing in the old days. Or at least employer didn't, The guys in the hot seat might have been more concerned !