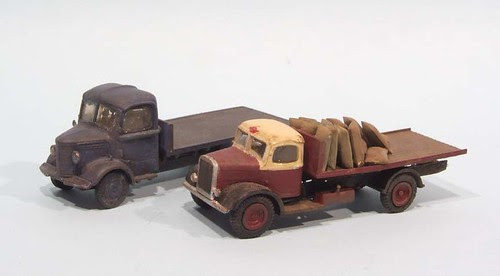 At the back we have a lorry built from a Springside whitemetal kit. I wanted to build what is a relatively expensive kit, since seeing one on a friends model of Scotland Street Yard. Dave's version was a lot better than mine, but I excuse myself by pointing out that it's a pig of a kit to build and I did mine many years ago. That said, if I wanted another, I'd go hunting for a die-cast and repaint it.

In front we have a much more traditional way to build such a vehicle, one from the RAF Airfix Emergency Set. For many years, modellers have seen the fire engine from this pack as the route to a Bedford. You'd use the cab (with the machine gun hole in the roof filled in), wheels and some of the chassis. The rest would be built from plastic sheet and strip - not rocket science but more work than modern modellers are accustomed too.

Incidentally, the fuel tank from the fire engine took up residence on the layout as an oil tank so the bits weren't wasted.
Posted by Phil Parker at 6:00 AM

Hold on, that truck at the front is the Austin surely...

Oooops. You're right. Odd that I've always thought of it as a Bedford but now you've mentioned it, the radiator is wrong. And the Airfix box says Austin.