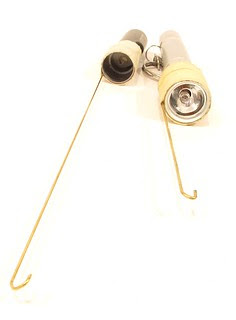 After struggling a bit with the 3-link couplings on our 7mm scale layout Clayhanger Yard, I came away from Midland Railex with a whole lot of helpful suggestions to make the hook we were using better.

The main improvement would be to lengthen the wire. Working between vans proved very difficult as the torch often hit the roof before the hook reached the coupling.

Thinner wire was suggested but I've stuck with 0.7mm brass as I don't fancy anything finer making it through the weekend without needing replacement.

Less for a curve on the hook is the second change. About 3/4 of a hook seemed to be the consensus.

My plan had been to test a number of hooks but and still stymied by the lack of small torches available locally. I'll keep looking as I'd like a selection to play with. I suppose the lighting up bit isn't essential, we didn't use it at Railex but then that was quite a bright show. Under the NEC sodium lights, I think a bit more illumination might be required.
Posted by Phil Parker at 5:30 AM