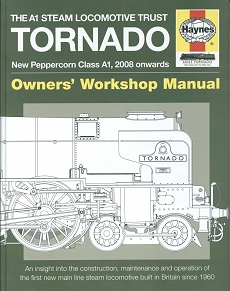 It used to be said that every Haynes manual was based on a complete strip down and re-build of the subject vehicle. This one is very different - it's based on the build of a very special one.

For those who don't know, Tornado is the first main line steam locomotive since 1960. A stupendous achievement, the book provides a full history of the project from inception to the end of the locomotives first year in service.

Along the way, the team have to deal with a railway system in turmoil thanks to John Major's incompetent privatisation. Standards bodies come and go and they have to change design features to comply with new regulations for anything running on the main line.

Having said this, that element provides a lot of interesting text. This is a modern steam loco and as such includes many refinements, all of which are explained along with the reasons for them. There's a heck of a lot of new electrical equipment to be fitted and most of it makes complete sense. This is the 1930s and so light on engines make sense. Fitting a "black box" recorder, cab radio and AWS too.

There is so much detail in this book that it's a fantastic read. None of it assumes you are a serious enthusiast - maybe this won't appeal to anyone who thinks they know it all, but I certainly picked up lots of useful info. Steam locos are complex things and yet this book tells you how to build one - sort of. At least you will understand what goes on in the smokebox and be able to explain "hammer blow".

OK, so you can't build an express engine by reading this book, but you can get an idea of the efforts that are required to do so. I enjoyed it immensely and can't see any obvious improvements. Maybe there could be more technical stuff at the expense of the story of how the trust was formed and ran, but I prefer the more rounded story. This shows how horribly complicated modern railway are and just how tough it is to run a railtour.

Along the way, tribute is rightly paid to some very hard working people. It's also a tonic for anyone who believes we've lot all the tradition skills to do this stuff. OK, the boiler came from Germany but I believe that even these can be made here now.

Non-car Haynes manuals tend to be horribly gimmicky. This one might not tell you how to fix anything but it is a fantastic read.

The A1 Locomotive Trust.