My Dad is a bit of a tram fan. Normally he sticks to British prototypes but at some time in the past he's spotted a Japanese model kit from Hasegawa and added it to the collection.

In the box, the mouldings are very nice and have assembled well. The transfers are brilliant too resulting in a very colourful model.

To display it, a length of track is included and I fancied it as a pleasant painting job. Nothing difficult but the moulding is very fine and ought to come up a treat with careful brushwork.Since complicated painting falls to me, I knew I'd be looking at it eventually.

Anyway, I painted it with Humbrol enamel. These were left to dry overnight and then I applied the finishing touch, a wash of dark grey between the stones. 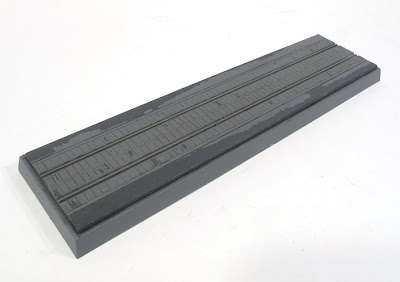 Suddenly, the paint crinkled like I'd poured Mek-Pak over it. For a while I kept and eye on it hoping the wrinkles would settle out. They didn't so I patted them a bit with some kitchen towel. That just removed the paint so I rubbed the rest of the piece and pretty much all the paint came off.

Was there mould release on the part that repelled the paint? That would be odd as injection moulded items don't normally require this and if they did, the manufacturers would wash it off. The part hadn't been handled much so I don't suspect finger grease. Maybe it's the material itself.

Anyway, a spray of Halfords grey car primer and more paint solved the problem. Sadly, while the real thing looks great, for some reason, the photo looks rubbish. You'll just have to believe me on that. 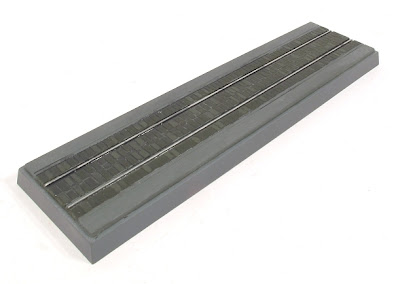 One final spooky thing - I can't find a mention of this kit anywhere on the web. Hasegawa Kit No. EC1: 1200 - a while bogie Japanese tramcar. Sadly, the box doesn't have much English on it so I don't know the correct kit title.
Posted by Phil Parker at 5:30 AM

Not a bogie tram, but I found this

That's a sweet kit. Odd scale though, sort of O gauge but not quite. Interesting lifeguards on the ends too.

1: Email me a picture of the kit and I'l ask my beautiful Japanese wife to identify it for you.

2: I travelled on a tram like that (including the lifeguards) in Japan a few weeks ago. I can look it up if you want. I suspect it is 1:45 because that gives an approimation of the prototype track gauge.