A pair of Fowlers 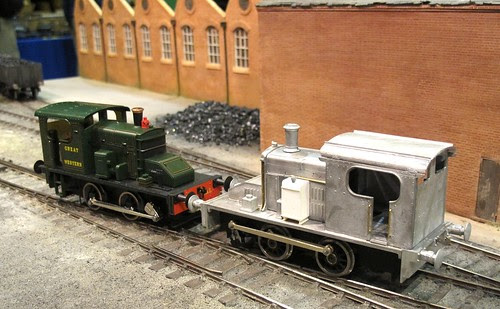 It's a common complaint that as soon as you start building a locomotive, along comes an easier option to produce the same thing.

So it was with the Fowler shunter. There I was, happily browsing the trade stands at Kettering show, and there was an announcement from Ixion that they would be producing the loco as a RTR model in O gauge. My first thoughts were to a half-built kit lurking in a cupboard. My second involved burning down the factory to stop this happening.

Anyway, fast forward a bit and I get my hands on the first pre-production, painted version of the RTR model (Thanks to EDM Models) to plonk on Clayhanger Yard. In the stock box is my still half-built kit, so it seems natural to compare the two.

I should point out a few things. The painted loco is due for revision before it goes on sale so the dodgy font will be fixed. My model represents the LMS version, hence the different donkey engine size and position. I'd love to do the GWR version but my painting and lining skills aren't up to it.

The kit is a lot heavier than the plastic version. The cab sides of the later are finer but overall, I don't think there is a huge amount to chose between them. You can decide for yourself whether this is good or bad. I think that it means a well-assembled kit next to a bought in model will look fine. No need to bin hours of construction work, nor feel that there is a better option than buying the Ixion model.

Will I hand of the cash for a RTR version? Nope. I don't need a fleet of these things, one is plenty, but if anyone wants to send one to me, then I wouldn't turn it down.
Posted by Phil Parker at 5:30 AM